Will Woodward
The Guardian 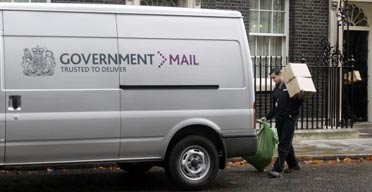 A government mail van outside 10 Downing Street, with the words ‘trusted to deliver’ on the side. Photograph: Kirsty Wigglesworth/AP

The loss of the child benefit CDs containing 25m names, as well as six other significant breaches since April 2005, “may well” indicate systemic failure at Her Majesty’s Revenue and Customs, its acting chairman acknowledged yesterday.But Dave Hartnett told MPs he had seen no evidence that senior civil servants were complicit in the rule breach which led to the loss of the two discs on their way from the HMRC centre in Tyne and Wear to the National Audit Office.

Yesterday the Metropolitan police offered a £20,000 reward for the return of the discs, after more than two weeks of searching, including two HMRC offices, four depots belonging to the courier firm TNT and a rubbish tip in Kent. Thirty-two detectives are still hunting for the discs.

“The key issue around that data is that it shouldn’t have left our premises anyway,” Hartnett told the Commons Treasury sub-committee. “The National Audit Office didn’t use the procedure. We didn’t release the data through the procedure.”

Asked whether it represented a “systemic failure”, Hartnett said: “I think that it may well do.” Hartnett replaced Paul Gray, who resigned last month.

Other breaches included the loss of a disc with banking information in 2006. “We introduced at that stage more stringent rules. We set out to learn lessons in relation to security,” Hartnett said.

Emails revealed by the National Audit Office showed that several officials knew about the release of the child benefit data. But Hartnett said last night: “I have seen absolutely no evidence – other than the one email that has been commented on in the media – anyone in the senior civil service, at any level, was copied into this.”