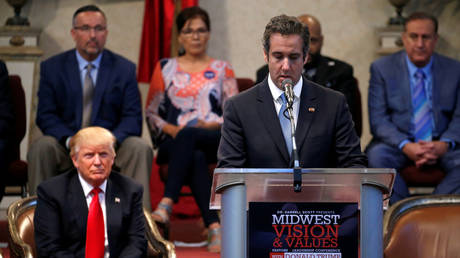 A bombshell report from BuzzFeed accused President Donald Trump of directing his former attorney Michael Cohen to lie to Congress – but was unable to provide any evidence to back the claim.

Buzzfeed’s Jason Leopold and Anthony Cormier claimed to have proof President Trump directly instructed his longtime fixer and attorney Michael Cohen to lie to Congress about plans to build a Trump Tower property in Moscow, plans that would have involved meetings and discussions with top-level Russian officials.

That Cohen lied in court is not news. The attorney pleaded guilty to the crime in November, telling a federal judge that the Trump company’s plans to build the property did not end in January 2016, as Cohen told a Senate Select Committee in 2017, but in June of that year. Cohen also admitted that he discussed traveling to Moscow with Trump, something he neglected to tell the committee.

However, BuzzFeed’s report now says that Cohen acted under direct orders from Trump, not simply “out of loyalty,” as he told the court in November. As so often is the case in articles linking Trump with Russia, no named sources are cited, only two anonymous “federal law enforcement officials.”

That was enough for ‘Russiagate’ advocates to pounce. Here, they said, was concrete proof that Trump sought to obstruct Special Counsel Robert Mueller’s investigation, which was probing the Trump campaign team’s alleged – and still unsubstantiated – links with the Kremlin during the 2016 US presidential election.

House Intelligence Committee chair and Adam Schiff (D-California) said the allegation “is among the most serious to date,” and that Democrats will “do what’s necessary to find out if it’s true.”

The allegation that the President of the United States may have suborned perjury before our committee in an effort to curtail the investigation and cover up his business dealings with Russia is among the most serious to date. We will do what’s necessary to find out if it’s true. https://t.co/GljBAFqOjh

We know that the President has engaged in a long pattern of obstruction. Directing a subordinate to lie to Congress is a federal crime. The @HouseJudiciary Committee’s job is to get to the bottom of it, and we will do that work.

Based on the Buzzfeed report and numerous other articles showing @realDonaldTrump committed Obstruction of Justice and other possible felonies, it is time for the House Judiciary Committee to start holding hearings to establish a record of whether @POTUS committed high crimes.

There was just one tiny little problem. The journalists who wrote the piece apparently haven’t seen any actual evidence to back up their story.

Cormier told CNN on Friday morning that he had not seen any evidence personally, but claimed that his anonymous sources were “fully read in” to that part of the Mueller investigation.

His reporting is based on law enforcement sources who are “read in to that part” of Mueller’s work. pic.twitter.com/PcXcuBQe1B

He also told CNN that his sources went “beyond the two on the record,” and included more unnamed “individuals who know this happened.”

Leopold was cagey too, telling MSNBC that over the course of writing about the Trump/Moscow project, the two “have seen documents. We have been briefed on documents. We are very confident in our reporting,” although he did not say whether these documents directly related to the latest story or not.

Anonymous sources are a staple of American journalism. While they were once considered more useful for giving ‘deep background’ detail, they have replaced actual hard documentary  evidence in the age of the Trump scoop. When the New York Times reported that a member of Trump’s cabinet was planning on wearing a wire to record the president and prove his unfitness for office, that piece relied on an anonymous source. Likewise, CNN was forced to retract an article linking Trump’s transition team with a Russian bank, after it emerged that the one anonymous source quoted was lying.

Here we go again… another CNN/Buzzfeed “bombshell” with no evidence. The usual clickbait BS… and when it fails as all the others have there will be ZERO coverage. Textbook #fakenewshttps://t.co/VNHN9ndz36

Two years ago, Buzzfeed published an unverified dossier abt Trump collusion. It was soon discredited.

Issues w/ story:
1) No documentary evidence for supposed directive is provided
2) BuzzFeed sources are all 100% anonymous
3) Michael Cohen is a serial liar
4) It is not illegal to do business in Russia
5) Moscow Trump Tower project never got off the groundhttps://t.co/ABh63SMUbJ

Also Buzzfeed : We have no proof though

BuzzFeed was the outlet that actually published the so-called Steele Dossier in January 2017, containing uncorroborated and salacious allegations against Trump compiled by a British spy and paid for by Hillary Clinton’s presidential campaign. Its contents have never been corroborated.

Following the publication, Trump described the outlet as a “failing pile of garbage.”

Last October, a US Treasury employee was indicted for leaking secret documents to BuzzFeed. Though Leopold and Cormier were not named in the indictment, the articles mentioned therein – all feeding the ‘Russiagate’ narrative – bore their bylines.

BuzzFeed will either be vindicated or proven wrong when Mueller’s investigation finally wraps up, although no definite timeline for that end has yet been given. Meanwhile, Cohen is due to appear before the Democrat-controlled House Oversight Committee next month, where he will surely face questioning on any direction Trump may have given.