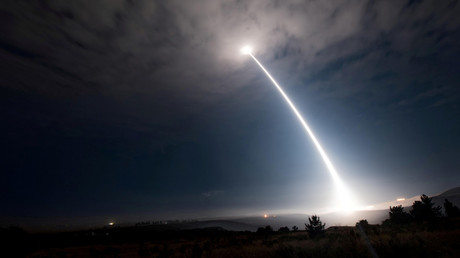 The US Air Force has test-fired its Minuteman III ballistic missile with the goal of verifying its “readiness and effectiveness.” Developed during the Cold War, the missile is capable of carrying three nuclear warheads.

The missile was launched on May 14 from an underground silo at Minot Air Force base in North Dakota by the 91st Missile Wing, Major Anastasia Schmidt, spokeswoman for US Global Strike Command, confirmed in a comment to Defense Post on Tuesday. The Minuteman III did not carry any warheads, and was purportedly launched to check its readiness, effectiveness, and accuracy.

Media reports say the missile dropped into the designated test site near the Kwajalein Atoll area in the central Pacific Ocean after traveling about 4,100 miles (6,500km).

It was the second such test this year. The most recent Minuteman III test launch occurred on April 25 from Vandenberg Air Force base in southern California.

Both launches came shortly after the Trump administration released a renewed Nuclear Posture Review (NPR) for the overhaul of the US nuclear arsenals and the development of new projectiles in order to match Russia’s strategic capability. Moscow blasted the new NPR, saying it was introduced to justify a “large-scale nuclear weapons buildup.”

Designed back in the 1970s, it is the only land-based intercontinental ballistic missile operated by the US military.