US President Donald Trump and Iraqi Prime Minister Haider al-Abadi are discussing keeping American troops in the country even after Islamic State (IS, formerly ISIS/ISIL) is defeated, according to officials from Washington and Baghdad.

The officials told AP, however, that discussions were ongoing and that nothing had been finalized.

The talks involve US Defense Secretary James Mattis and Iraqi officials discussing “what the long-term US presence would look like,” according to the Military Times.

AP reported that officials said there is an “understanding on both sides that it would be in the long-term interest of each to have the continued presence [of US troops]…. both understand it would be mutually beneficial.”

What the long-term deployment would look like is still in the early stages, but it is believed US forces in Iraq would be stationed inside existing Iraqi bases in at least five locations in the Mosul area and along Iraq’s border with Syria.

The US official said there is no talk of “creating independent American bases in Iraq,” as the move would require thousands more personnel. The troop levels proposed would be “several thousand similar to what we have now, maybe a little more.”

The discussions come as the Trump administration secured a 15-percent increase for the military in the budget bill negotiated by Congress at the weekend. The bill would fund the government until the end of September 2017. Trump has already said that while he plans to slash cuts to major government agencies from 10-25 percent in the 2018 budget, he intends to increase military spending by 9 percent.

The Pentagon has close to 7,000 troops in Iraq. The forces include troops training Iraqi forces, coordinating airstrikes and ground operations, and special forces operating on the front lines.

In March, Defense Secretary Mattis said there was interest in keeping US soldiers on the ground in Iraq, and it was in America’s “national interest,” a desire expressed during a Senate Appropriations Committee hearing.

Mattis made it clear that US involvement will not end when Mosul is finally captured from IS.

He went on to say that he does not “see any reason to pull out again and face the same lesson,” adding that the US “needs to remain decisively engaged in Iraq and in the region.”

Around half a million people died in Iraq from war-related causes during the US-led intervention between 2003 and mid-2011, according to a study published in 2013. That figure was around four times bigger than previous estimates.

A separate 2013 study found that the Iraq War cost $1.7 trillion, with an additional $490 billion owed to war veterans, noting that the expenses could grow to around $4 trillion over the next four decades, counting interest. 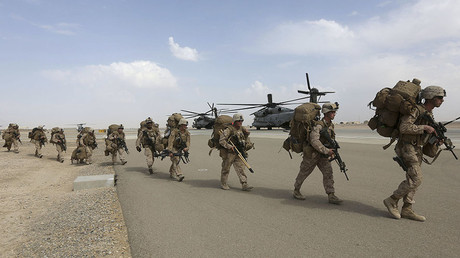 At the height of the US troop surge in 2007 there were 170,000 military personnel posted to Iraq. The numbers went down eventually to 40,000 before the complete withdrawal in 2011 under the Obama administration.

Over the nearly three-year fight against Islamic State, Iraqi forces with US-led coalition backing have retaken some 65 percent of rebel-controlled territory, according to the Pentagon.

In April, Trump gave the Pentagon authority to independently set troops levels in Iraq and Syria.

“The president has delegated the authority for Force Management Levels (FML) for Iraq and Syria to the [Defense] Secretary [James Mattis],” said Pentagon spokesman Captain Jeff Davis, as cited by ABC.

He also said that no change had been made to the number of US troops in the Middle East, adding that the current military strategy involves rendering support to local militias fighting IS.

The move does not mean that the numbers of troops in Iraq and Syria will change, “nor does it change the process by which we will manage those forces,” said Davis.

If the long-term presence of US troops in Iraq comes about, it would represent another Trump administration reversal of a key Obama administration initiative.

Trump was critical of the 2011 US troop withdrawal during his campaign, largely blaming Obama for the rise of Islamic State.