Venezuela’s Bolivarian Revolution, which took off with the election of President Hugo Chávez in December 1998, frequently and even quite recently received praise for its social gains from the United Nations, international humanitarian organizations and economists. This aspect of the country’s story has been almost entirely written out of media coverage of the effort to overthrow the Venezuelan government by the US, Canada and their right-wing partners in Venezuela and the region. 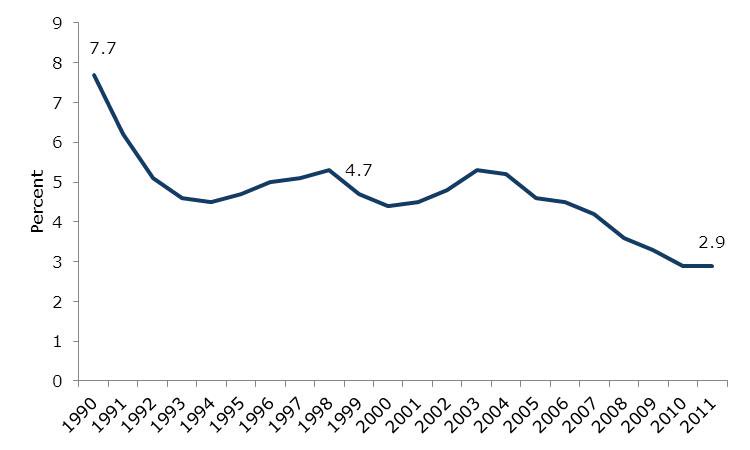 Malnutrition in children under five was one of several social indicators that improved dramatically in Venezuela following the election of Hugo Chávez in 1999. (Source: Instituto Nacional de Nutrición/CEPR)

Under Chávez, poverty in Venezuela was cut by more than a third, and extreme poverty by 57 percent (CEPR, 3/7/13). (These declines were even steeper if measured from the depths of the opposition-led oil strike, designed to force Chávez out by wrecking the economy.)

In June 2013, the UN’s Food and Agriculture Organization (FAO) included Venezuela in a group of 18 nations that that had cut their number of hungry people by half in the preceding 20 years, 14 of which were governed by Chavismo: The FAO said that Venezuela reduced the number of people suffering from malnutrition from 13.5 percent of the population in 1990–92 to less than 5 percent of the population in 2010–12; the FAO credited government-run supermarket networks and nutrition programs created by Chávez.

Three months later, the UN Committee on the Elimination of Racial Discrimination said that it “welcomes the social development measures, programs and plans that include indigenous peoples and people of African descent, which have helped to combat structural racial discrimination” in the country. The committee also noted that it

welcomes the progress made by the [Venezuelan government] in the area of education and its efforts to reduce illiteracy, as a result of which it was declared an “illiteracy-free territory” by the United Nations Educational, Scientific and Cultural Organization (UNESCO) in October 2005.

In 2014, Niky Fabiancic, resident UN coordinator for Venezuela, called the country “one of the leading countries in Latin America and the Caribbean in reducing inequality,” according to Venezuelanalysis (5/9/14). The website also quoted UNICEF representative Kiyomi Kawaguchi as saying that from 2009–10, 7.7 million students attended school, an increase of 24 percent over ten years previously.

Thus, in the Bolivarian Revolution’s 14th and 15th year, multiple UN organs highlighted how Chavismo had improved the lives of Venezuela’s poor majority.

Similarly, the UN’s Economic and Social Council published a report in 2015, two years into the presidency of Nicolas Maduro, that said the council

One widely used measure of a country or territory’s overall well-being is the UN’s Human Development Index (HDI), a statistical composite index of life expectancy, education and per capita income indicators. The most recent HDI report is the one that was published in 2018, based on 2017 data.

The 2018 report put Venezuela in the category of countries or territories that have “High Human Development,” the second best of the HDI’s four rankings, and 78th of the 189 countries and territories examined. On that list, Venezuela outranks the majority of the states in the 14-country Lima Group currently trying to overthrow its government, including Brazil, Colombia, Guatemala, Guyana, Honduras, Paraguay, Peru and Saint Lucia. Guatemala, Guyana and Honduras are categorized as “Medium Human Development,” the group below the one to which Venezuela belongs and the second lowest HDI category.

The HDI does not provide a perfect picture of present conditions in Venezuela, since the situation in the country has evolved and appears to have worsened since 2017, in large part because of the sharp escalation of the economic war on the country by the Trump administration in August 2017. The HDI does, however, indicate that by this metric, in 2017 Venezuela was doing reasonably well by regional and global standards even in the face of harsh sanctions.

While the progress made by the Bolivarian Revolution has eroded—in larger measure due to US, Canadian and European sanctions undercutting Venezuela’s economy and its people’s access to food and medicine—a mere six months ago, Alfred de Zayas, the first UN special rapporteur to visit Venezuela in 21 years, issued a report based on his late 2017 visit to the country, four years into the Maduro era. The report says:

In the Bolivarian Republic of Venezuela, the Gran Misión Vivienda low-cost housing program has contributed to saving millions of persons from homelessness. Over 2 million housing units have been delivered to persons who would otherwise live in shanty towns. In order to address hunger, the Local Supply and Production Committees provide needy Venezuelans with 16kg packages containing sugar, flour, dried milk, oil etc., as the independent expert was able to verify at the Urbanización Nelson Mandela. Another social acquis, El Sistema, established by the late José Antonio Abreu, has offered free musical education to over 1 million youngsters, contributing to a reduction in juvenile delinquency.

Each of these pieces of information constitutes evidence about life in Venezuela in the Chavismo period, which the US and its partners are attempting to end. As such, this data should at least be part of the current conversation about Venezuela, especially inside of states that are trying to illegally oust the Venezuelan movement that not long ago was being praised for its successes by the UN, international humanitarian groups, and economists, and drawing favourable comparisons to the social order that had previously prevailed in the country. 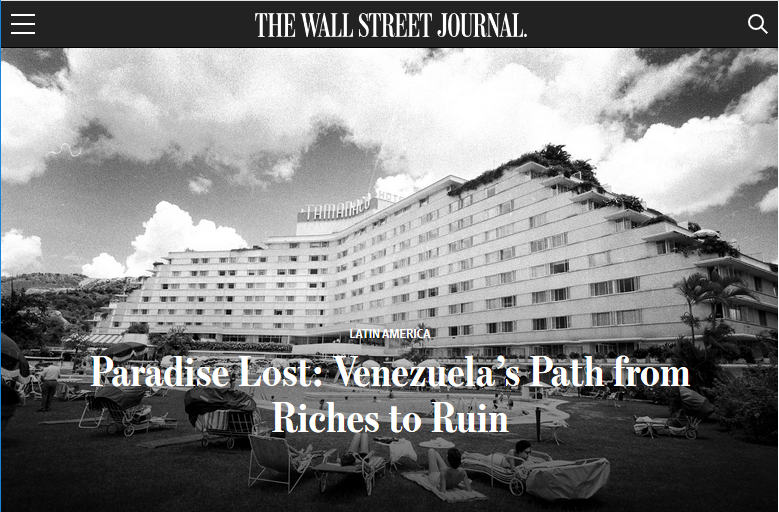 To the Wall Street Journal (2/7/19), Venezuela was “paradise” when it was much more unequal.

To assess whether US media have noted this crucial part of the story of the Bolivarian Revolution, I used the media aggregator Factiva to search the databases of three of the country’s major newspapers:  the New York Times, Wall Street Journal and Washington Post. I examined the period since the US government and its allies have asserted that Juan Guaidó is the president of Venezuela, not the elected Nicolás Maduro. According to Factiva, the three outlets have run a combined 800 pieces in the intervening period, and I was able to find four that make reference to Chavismo social programs and even these are done in a vague, dismissive fashion. None discuss in any detail the accomplishments that won the Bolivarian Revolution international acclaim.

Mr. Chávez expropriates farms and businesses, and uses oil revenue to build homes, distribute food and upgrade healthcare. The programs reduce poverty and make him popular. But he also saddles Venezuela with high inflation, billions in foreign debt and makes the country even more oil dependent.

This piece’s mention of Chavismo’s achievements subsumes them into an overarching narrative that is overwhelmingly focused on the many failures the authors attribute to the Bolivarian Revolution. 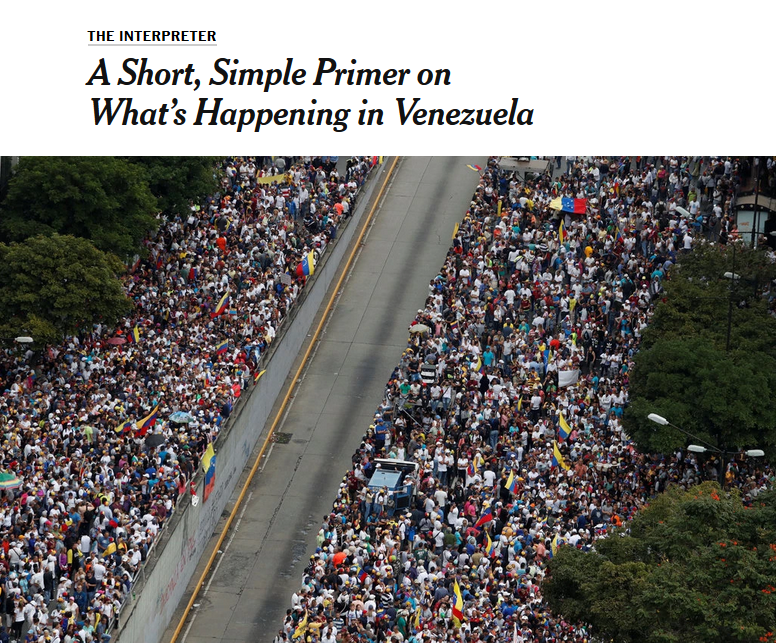 The New York Times‘ “short, simple primer” (1/24/19) on “how did things in Venezuela get so bad?” never mentions the word “sanctions.”

Max Fisher of the New York Times (1/24/19) noted that “Mr. Chávez was a dedicated leftist who spent heavily on social programs,” but failed to mention that these programs benefited Venezuelans for a very long time, especially the poorest in the country. In a common trope that’s typically used against leftist governments, especially those in the Global South with non-white majorities, Fisher denigrates the use of Venezuela’s resources to aid its people as a kind of bribery: “handouts to maintain support among his supporters.”

Also in the Times, Virginia Lopez Glass (1/25/19) made a brief, hand-waving reference to the long period of successes of the Bolivarian Revolution, writing that “perhaps Venezuela is finally at the end of a political cycle that, despite some years of social gains, ultimately impoverished what was once the richest nation in the region.”

Times columnist Bret Stephens  (1/28/19) mentioned Chavismo’s social programs, but only to blame government spending on these for the country’s ailments.

The Post seems not to have made any mention at all of the improvements the Bolivarian Revolution brought to the poor and working class who make up most of Venezuela’s population.

When the gains that Chavismo made are erased from the story being told about the country, a distorted version of events is presented. This accounting carries the incorrect message that the Bolivarian Revolution has been an abject failure from start to finish, and that every aspect of the project must therefore be abandoned in order to improve Venezuelans’ conditions. Such a misleading narrative further suggests that, since the Venezuelan government has allegedly brought only harm to the country’s people, the states involved in the effort to remove the Venezuelan government are justified in so doing, and their citizens should support rather than try to stop these efforts.

The starting point for discussions about Venezuela involving anyone who purports to care about the welfare of the people of the country ought to be the question, “What steps can be taken for Venezuela to resume making the impressive strides that it made for the majority of the time that Chavismo has held power?” as opposed to, “How can we disempower the social forces that gave birth to those gains, namely Venezuela’s poor and disproportionately mestizo, indigenous and black populations?” To their discredit, corporate media have framed their coverage around the latter rather than the former–a question whose answer necessarily involves lifting the draconian sanctions.