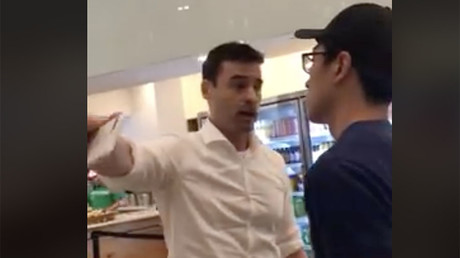 A lawyer blew a gasket after hearing people speaking Spanish in a New York restaurant, with footage of the bizarre freak-out showing the man threaten a waiter and two customers with deportation.

The man’s rant at an eatery in Midtown appeared online on Tuesday and has since gone viral.

Edward Suazo in New York said his wife and her friend filmed the bizarre freakout as the man interrupted their conversation with a waiter. In the clip the angry man can be heard threatening to call US immigration on the group of Spanish speakers.

“Your staff is speaking Spanish to customers when they should be speaking English,” he can be heard to say. “It’s America… my guess is that they are not documented so my next call is to I.C.E [US Immigration and Customs Enforcement] to have each one of them kicked out of my country. I pay for their welfare, I pay for their ability to be here. So the least they could do is speak English,” he added.

“What a big man talking down to a couple of women and a helpless employee… they weren’t talking to you a**hole,” he added.

The manager of the Midtown restaurant told the New York Daily News that after the meltdown the man was subsequently asked to leave. The irate individual in the footage has since been identified as New York lawyer Aaron Schlossberg. According to CNBC, the lawyer’s rant has cost his business in ratings on Yelp and has also seen people poke fun at him online.

Another added: “Well I guess Aaron Schlossberg is [someone] who I will not be hiring if I ever need a lawyer. Signed: Every damn person in the tri-state area.”

Welllllll…… looks like @ASchlossbergLaw is who I WILL NOT be hiring if I ever need a lawyer.

Signed: EVERY DAMN PERSON IN THE TRI STATE AREA (but especially us SPANISH speaking ones) #aaronschlossberg