Weapons sent by the Obama administration to so-called ‘moderate’ anti-government forces in Syria instead fell into Al-Nusra jihadists’ hands, according to a US-trained rebel and fixer in Aleppo.

Major Anas Ibrahim Obaid, better known by his nom de guerre Abu Zayd, told Fox News that he gave pickup trucks and ammunition supplied by the US to Al-Nusra, an Al-Qaeda affiliate, and sold more on the black market once his American handlers got wind of this and cut his salary.

Zayd defected from the Syrian Army in 2012 to the opposition, and made his way to Turkey for US training. After a few cursory questions about his opinion on Islamic State (IS, formerly ISIS) and some basic training, he was sent back across the Syrian border to fight in 2015.

With salaries low and morale lower, many of Zayd’s group of 72 fighters defected, and he decided to return to Aleppo to fight President Bashar Assad’s forces. Getting home involved a trek through territory held by Al-Nusra, but after giving the jihadist group five US-issued pickup trucks and a haul of ammunition, they granted him safe passage.

The trucks and ammo had been given to Zayd under a failed $500 million Pentagon program aimed at training and equipping an “ideologically moderate” force to topple the Assad government.

After the Pentagon found out about the deal, Zayd’s salary was cut and the US severed ties with him. He still hung on to his American weapons however, and according to an associate, reportedly makes a tidy profit selling them on the black market. His stash includes M-16 and M-24 rifles, rocket launchers, .50 caliber machine guns and mortars.

Another Obama administration program, codenamed Timber Sycamore, was started in 2012 with the aim of supplying weapons to anti-government rebels along the Turkish border in the north and the Jordanian border in the south of Syria.

Asem Zidan, a former media activist with the US-backed Hazem Movement, told Fox that the US supplied his side with wire-guided anti-tank TOW missiles. The US didn’t supply enough weapons though, and Zidan’s comrades were attacked by Al-Nusra and had their missiles stolen.

According to Ibrahim al-Jabawi, a former police leader in the Syrian province of Homs and spokesman from the US-backed Southern Front group of fighters, “some of the TOW rockets ended up with Al-Nusra.”

With a single TOW missile capable of obliterating a Syrian Army T-90 tank, it’s no wonder they can retail on the black market in Syria for as much as $30,000. As well as acquiring missiles from the black market or other rebel groups, Al-Nusra has reportedly received American weapons from the US, via allied states in the region. 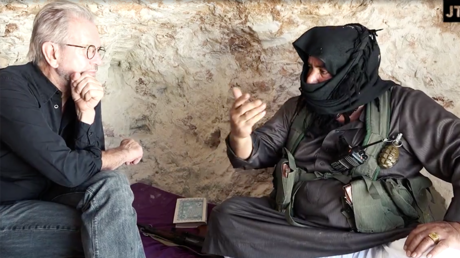 In 2016, an Al-Nusra commander named Abu Al Ezz told the German Koelner Stadt-Anzeiger newspaper that his group, and not so-called ‘moderate rebels’, received TOW missiles directly from the US.

“The missiles were given to us directly,” he said, adding: “The Americans are on our side.” The commander went on to detail how his fighters had received training from US instructors, and financial support from Saudi Arabia and Israel for capturing specific objectives in Syria.

“We got 500 million Syrian pounds (around $2.3 million) from Saudi Arabia. To capture the Infantry School in Al Muslimiya years ago we received 1.5 million Kuwaiti dinars (around $500,000) and Saudi Arabia’s $5 million,” he said.

President Trump ended the US arms supply program to Syrian rebels in 2017. The US has since stepped up its direct involvement in Syria however, despite Trump’s campaign promise to withdraw completely from the conflict. After striking government targets in response to an unproven chemical weapons attack last month, US Defense Secretary James Mattis told the Senate that the US would be deepening its involvement in Syria.

“Right now we are not withdrawing,” Mattis told the Senate Armed Services Committee. “We are continuing the fight, we are going to expand it and bring in more regional support. This is the biggest shift we’re making right now.”

At a White House news conference the same week, Trump said that US troops would be “coming home relatively soon,” but he also wants to leave a “strong and lasting footprint” in the region.