Labour leader Jeremy Corbyn has slammed the Tory government’s response to the “slaughter” of scores of Palestinians by the Israeli military during protests in Gaza, labeling it “wholly inadequate”.

At an emergency debate, called by Shadow Foreign Secretary Emily Thornberry, which saw Britain’s top diplomat Boris Johnson flee the Commons as it was starting, Corbyn said that Western governments such as the UK could “not turn a blind eye to such wanton disregard for international law”.

In a direct attack on Theresa May’s government, the Labour leader, who has been a constant supporter of the Palestinian people since entering Parliament, said: “The response from many Western governments to this flagrant illegality, including our own – which bears a particular responsibility for a peaceful and just resolution of the Israel-Palestine conflict – has been wholly inadequate.” 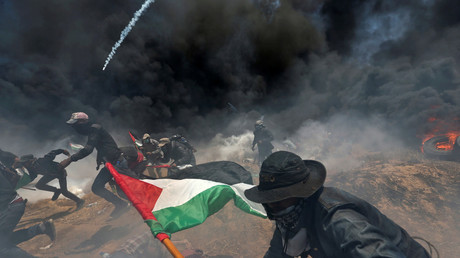 He went on to recommend that the Government learn from the work undertaken by Israeli peace campaigners who have consistently demanded the end of human and political rights abuses committed by Israel on Palestinians.

“They should take a lead from Israeli peace and justice campaigners: to demand an end to the multiple abuses of human and political rights Palestinians face on a daily basis, the 11-year siege of Gaza, the continuing 50-year occupation of Palestinian territory and the ongoing expansion of illegal settlements.”

Since Palestinians called for the ‘Great March of Return’ on March 30, where protesters have demanded the right of return for Palestinian refugees and their descendants with a series of demonstrations, 104 Palestinians have been killed, including 12 children and injuries have passed 12,600, of which 55% have been hospitalized as a consequence of live ammunition being used by the Israeli Defense Force (IDF), the United Nations Office for the Coordination of Humanitarian Affairs (OCHA) in the occupied Palestinian territory reports.

Hugh Lanning, chairman of the Palestine Solidarity Campaign, spoke to RT UK’s Bill Dod from the demonstrations outside Downing Street. He criticized the Foreign Secretary’s rhetoric in his response to the killings in Gaza, claiming that “Boris Johnson’s statement today compared it to a game of cards but for the Palestinians this isn’t a game, this is their lives and their freedom.”