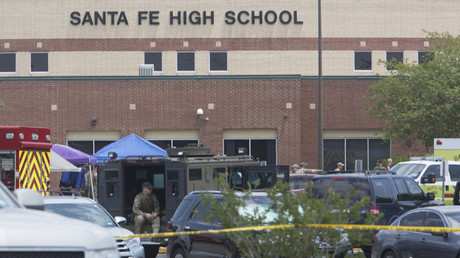 US officials and public figures have reacted with various brands of outrage following the fatal shooting of 10 people ‒ one teacher and nine students ‒ at Santa Fe High School in Texas.

Survivors of the Parkland High School shooting struck a frustrated tone as they bemoaned the lack of action from US politicians since the February attack on their school, in which 17 people died.

David Hogg, Cameron Kasky and Emma Gonzalez, who have since gone on to become high-profile advocates for gun control, each took to Twitter to deliver their verdict about the shooting and the influence of the National Rifle Association (NRA) on US politics.

Get ready for two weeks of media coverage of politicians acting like they give a shit when in reality they just want to boost their approval ratings before midterms.

At least 8 students have been shot and killed at Santa Fe High School.

Prepare to watch the NRA boast about getting higher donations.

Prepare to see students rise up and be called ‘civil terrorists’ and crisis actors.

Prepare for the right-wing media to attack the survivors.

Santa Fe High, you didn’t deserve this. You deserve peace all your lives, not just after a tombstone saying that is put over you. You deserve more than Thoughts and Prayers, and after supporting us by walking out we will be there to support you by raising up your voices.

Some commentators took exception to the Texas Lieutenant-governor Dan Patrick’s assertion that there are too many entrances to schools, and that’s why shootings happen.

“Had there  been one single entrance possibly for every student, maybe he would have been stopped,” Patrick said. His comments drew the ire of broadcaster Piers Morgan, who issued a particularly withering response.

That has to be one of the stupidest things I’ve ever heard. Ask any fire chief.

Then what happens when the school catches fire? NRA puppets twist themselves into pretzels thinking of ways to reduce gun violence that have nothing to do with guns.

Calls for more gun control are common in the aftermath of mass shootings, yet some were quick to point out that standard laws prohibit anyone under the age of 18 from owning a gun. The reported shooter, 17-year-old Dimitrios Pagourtzis, is said to have used a shotgun and a .38 revolver he took from his father.

Can’t say anything about #GunControl because the shooter was only 17. There already is gun control! 17 year olds can’t have guns. #SantaFe

Others repeated the controversial suggestion that teachers be armed in order to neutralize school shooters before they get a chance to cause widespread damage.

If Hillary Clinton can come out and call for gun control in the immediate wake of the Texas school shooting, then I have no shame coming out and saying those kids deserved better. They should have been protected by armed guards or teachers. Gun free zones don’t work!

Arm our teachers. Promote “see something, say something”. Hire military veterans to protect our schools.

This carnage must end. Let’s stop playing around and let’s start keeping our schools as safe as we do our airports.