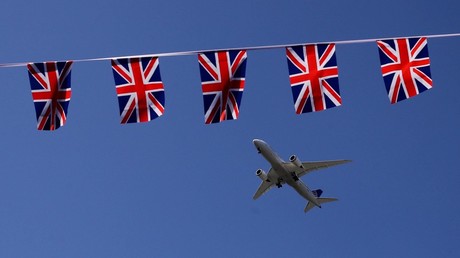 Royal wedding mania has hit fever pitch as royal enthusiasts descend on Windsor to pitch their tents and camp out ahead of tomorrow’s nuptials.

The prized spots in the town center, many vacated by the area’s homeless who had been told to leave ahead of the big day, have been filled by monarchists since Wednesday, hoping to secure a good view on the big day.

But not everyone is so keen on the Queen, hot for Harry, or amazed by Meghan. So we trawled the Twittersphere to bring you some of the best anti-royal wedding comments.

Something dodgy is afoot according to this tweet. Is Theresa May stacking the House of Lords in her favor all while we drape Union Jacks around our shoulders and raise a glass of Pimms for the next royal couple? Probably.

Under the cover of a royal wedding, Theresa May is set to nominate 10 Tory peers in an atempt to avert further defeats on Brexit motions. Sound a bit like vote rigging? That’s because it is exactly that. It goes against all political conventions… #VoteRigging#Jerrymanderingpic.twitter.com/6Em4EW1GjV

Or how about some “actual gammon” turning up in Windsor to support Megs and Harry, instead of your hard Brexit-loving Uncle Richard.

Meanwhile, Oakhampton Labour thinks the royal wedding may drown out the recent developments over Sergei Skripal. Don’t worry, we got the latest details here.

Sergei Skripal has been released.. I wondered which news story the government was going to bury under a royal wedding.

A recent poll by YouGov found that most Brits thought the royal wedding was “pointless.”

Royal expenditure footed by taxpayers is always a guaranteed way to inspire ire. Why fund a wedding when you can spend £30 million ($40.4 million) on a storage shed in the capital?

£30m pounds being squandered on that poxy Royal wedding that no one really gives a toss about.
£30,000,000 – I could (almost) buy a one bedroomed flat in London for that!

If the Queen had any backbone, she’d lay out four of her horses for a Yankee and help the taxpayer pay for this Royal Wedding.

Weddings: A time for giving advice.

Put down the can of Slimfast. Lose the pounds the easy way by reading the Mail on Sunday’s wedding pullout special.

Who needs Kim Kardashian’s appetite suppressant lollipops when you can just read about the Royal Wedding. #nausea

For all you kids not studying for your GCSEs, remember – you could end up like this guy. So, turn off the BBC’s rolling updates on the wedding cake and open a book.

There is Union Jack bunting on my desk. I am wearing a Union Jack tie. And socks. Work hard at school, kids, or you may ended up in a call centre where ‘fun’ is compulsory. #royalwedding

Weddings are also a perfect time to teach and traumatize your children.

My 5yr olds were so excited to go to school for their royal tea party today until I told them we cant go to the fun fair tomorrow because daddy has to pay tax to fund the royal wedding. They cried, “Enjoy the monarchy…” I said “because you’re paying for it”.

Are your kids going to a royal-wedding-themed party this weekend? Are you secretly shuddering at the prospect of dressing them up like Disney princesses? Why not go as Uncle Mao instead!

It’s not the royal wedding so much that annoys people, more so the constant viewing of former-royal butler Paul Burrell’s “smug moonface.”

I can cope with pro and anti royal wedding stuff, I can just about deal with the ‘breaking news’ stories about next to nothing but for the love of fuck please make Paul Burrell go away. I can’t take his smug moonface any more.

And finally, let us not forget who had the original royal wedding.