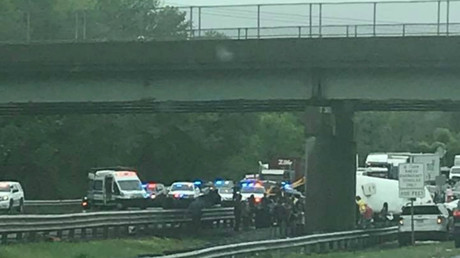 A dramatic crash between a school bus and a dump truck on Interstate 80 in New Jersey has left several people injured and completely destroyed the bus.

The bus was carrying middle school students from the town of Paramus when the incident took place, USA Today reports. Photos and videos from the scene of the incident show the body of the bus was ripped from its chassis. The front of the bus has also been completely destroyed.

Police said it is not known how many children were on the bus but they did confirm that several patients were taken to medical centers in the area. NorthJersey.com is citing “multiple sources” in reporting that one person died in the crash. However no official source has yet reported any fatalities.

#NJSP investigating serious MVA westbound on I-80 @ MP 25 in Mount Olive Twp, Morris County involving a school bus and dump truck. All lanes shut down. No further information available at this time. #Alert

The bus is believed to have been carrying students from Eastbrook Middle School on a field trip to a nearby historic village.