A Hezbollah presence at a London march would put both Jews and Muslims at risk, Home Secretary Sajid Javid has been warned. Backers of the Lebanon-based group are reportedly planning to attend next month’s Quds Day in the capital.

In a joint letter, Muslim-led Faith Matters and the Campaign Against Anti-Semitism, told Javid that Hezbollah flags at the Quds Day event would would provoke divisions. 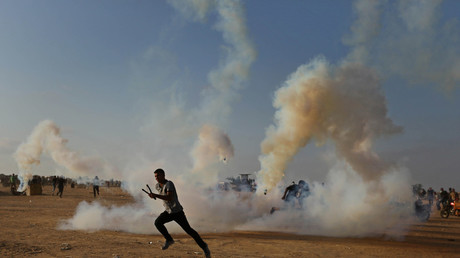 The letter described the militant-political group’s flag, which features an assault rifle alongside a dagger, as “bloodcurdling.”

The letter added that flag’s presence at the march, organized in solidarity and support with the oppressed Palestinian people, would “embolden those who seek to incite hatred” and make “a mockery of counter-extremism initiatives.”

The letter reads: “It [Quds Day] is a rallying point for anti-Muslim bigots who wish to portray all British Muslims as terrorist sympathizers, and for anti-Semites, who admire Hezbollah’s stated mission to seek out and murder Jews around the world.”

Quds Day, which was originally set up by Iran, is marked by hundreds of thousands of protesters across the world who rally in solidarity with Palestinians and against Israel’s occupation of their land. The march has come under particular focus in recent days after Israeli forces killed 104 Palestinians, injuring 12,600, since the 30th March during Gaza-based demonstrations, according to the UN.

The event’s attendees and organizers have faced accusations of anti-Semitism from Zionist organizations and figures. Pro-Israeli groups organize counter-demonstration to coincide with the march, invariably leading to tension.

In 2017, 15,000 people signed a petition urging London Mayor Sadiq Khan to ban the demonstration citing the presence of the Hezbollah flag as reason to do so. The demonstration went ahead.

While Hezbollah’s military wing is banned in Britain, it’s political wing is not. In the recent Lebanese general elections, Hezbollah and their Shia ally ‘Amal’, were hailed as the biggest winners attaining 29 of Lebanon’s 128-seat parliament.