Since the Palestinians’ Great Return March began on March 30, Israel has killed 217 Palestinians in Gaza, 163 of whom were participating in the demonstrations. Among the dead are 33 children, three paramedics and four people with disabilities; Israel has injured a further 11,155 Palestinians, many of whom will be maimed for life.

The media’s attempt to present a “balanced” version of these events is a fundamentally flawed approach, because it erases myriad, consequential differences:  between colonizer and colonized; between oppressing people and people resisting oppression; between, on the one hand, the regional military superpower backed by the global hegemon and, on the other, unarmed and lightly armed protestors.

These inequities are buried when Palestine/Israel is presented as though it were a civil war, or a “he said, she said” story where the reality of what’s happening—ethnic cleansing, apartheid and resistance to these—is impossible to unravel. Such “both sides” coverage wrongly suggests to readers that this is a mere “conflict” between parties on equal footing and with equally valid claims of injury against each other. It is the formal expression of what I show in my book, The Wrong Story: Palestine, Israel and the Media, is the false narrative that Israelis and Palestinians have harmed each other to a roughly comparable degree, and share proportionate responsibility for the absence of peace. 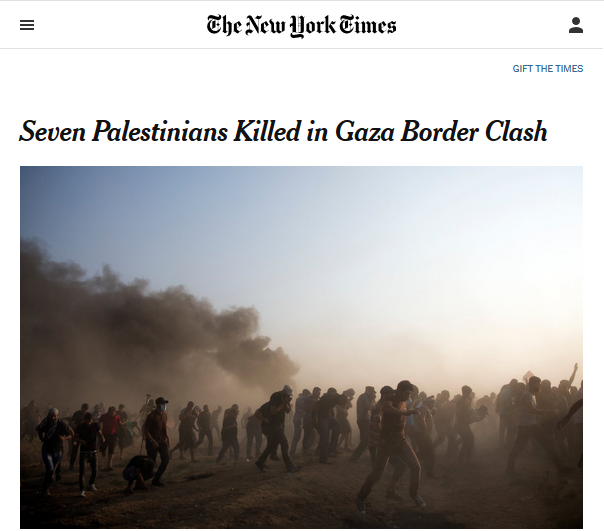 A Reuters report in the  New York Times (9/28/18) leaves out who did the killings—and describes Israeli snipers killing protesters from hundreds of yards away as a “clash.”

On a day when Israel killed seven Palestinian demonstrators, two of whom were children, a Reuters report (9/28/18) devoted 62 words to the Palestinian account of the violence and 57 to Israel’s. One 43-word paragraph is spent presenting the issues animating Palestinian protest as statements of fact:

About 200 Palestinians have been killed since the Gaza protests began on March 30 to demand the right of return to lands that Palestinian families fled or were driven from on Israel’s founding in 1948, and the easing of an Israeli/Egyptian economic blockade.

One 35-word paragraph presents the Israeli perspective as statements of fact:

A Gaza sniper killed an Israeli soldier in an earlier protest, and Palestinians have used kites and helium balloons to fly incendiary devices over the border fence, destroying tracts of forest and farmland in Israel.

Presenting Palestine/Israel in such an “even-handed” manner necessarily involves elisions. The latter passage lists the weapons Palestinians have used during the protest (a sniper, “kites and helium balloons”) but there is scant mention of the weapons Israel is using—drones, helicopters, jets, a naval blockade—to try to quell the protests, maintain apartheid, and prevent Palestinian refugees from returning to their lands. Had these been inventoried, it would be obvious that there is nothing balanced about the deadliness of the weaponry available to the parties involved in this struggle.

Similarly, readers are told that Palestinians have “destroy[ed] tracts of forest and farmland in Israel,” but no details about the consequences of the blockade of Gaza are noted. These include the theft of Palestinian farmland, which is one part of Israel’s deliberate destruction of Gaza’s economy, as well as Israel’s obstruction of  Palestinians’ access to clean water, electricity and medical care. Such specifics would belie the symmetry these articles attempt to construct.

CNN (9/28/18) spent three paragraphs on the Palestinians’ version of events and three on Israel’s. This structure encodes the message that Palestine-Israel is a story of two parties on a level playing field. Yet one party has international law on its side—and, frankly, any minimally coherent conception of justice—and the other doesn’t: Israel’s blockade of Gaza is illegal; the Palestinian refugees have a legal right to return to their homes, and a legal right to resist occupation, including by force.

When Israel killed three Palestinian demonstrators, including a thirteen-year-old, the Associated Press (10/6/18) spent 68 words describing what Palestinians say happened. These are set against 52 words given to Israel’s side of the story. Readers are told that

the Israeli military said about 20,000 protesters participated. They threw explosive devices and grenades toward the troops which used tear gas and live fire to, it added.

Allotting almost the same number of words to the colonizer killing three Palestinian civilian protestors, including a child, as to anti-colonial resistance against an occupier’s military forces implies that these actions are equivalent. Yet this supposed equivalence rests on omission: A reference to Palestinians “chanting slogans against a stifling Israeli/Egyptian blockade” of Gaza is the only reason for the protests that the article provides; that the Palestinians are attempting to exercise their right of return is excised from the conversation. Mentioning that more than two-thirds of the Palestinians in Gaza are refugees displaced by Israel, and that Israel and its allies are preventing these refugees from  exercising their right to return to their homes, would expose the absurdity of giving equal weight to Palestinian and Israeli grievances. 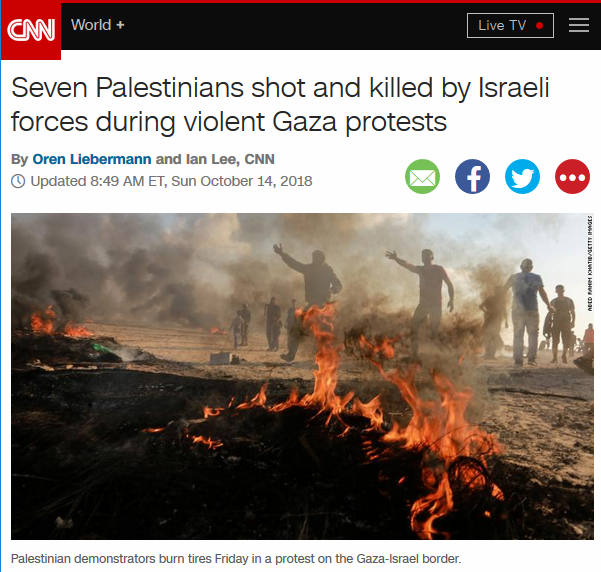 CNN (10/12/18) neutralizes the killing of seven Palestinian protesters with the characterization of “violent Gaza protests.”

A CNN story (10/12/18) on Israel’s killing of seven more Palestinian protesters spends 186 words on what Israel has done to Palestinians and on 190 on what amounts to Israel’s point of view. Mentions of the deaths of Palestinians are consistently paired with a reference to ostensible Palestinian violence:

A fake “balance” between Palestinians and Israelis is a “balance” that favors Israel, because it requires a downplaying of the severity of the wrongs Israel has done and is doing to Palestinians, and an amplification of Israel’s untenable rationalizations for these. “Balance” ought not to be the goal of coverage of Palestine/Israel. Instead of pretending that the conduct of Palestinians and Israelis is qualitatively and quantitatively the same, what’s needed is an honest accounting. That necessarily entails foregrounding the dispossession, oppression and murder Israel has inflicted on Palestinians, and situating Palestinian actions in this context. Presenting a wildly unbalanced situation as balanced is as morally bankrupt as it is intellectually indefensible.