A US military helicopter dropped a whole box of ammunition on an elementary school in El Paso, Texas. It’s not the first time that a US army aircraft lost objects while flying over civilian buildings.

The military ammunition can landed on Parkland Elementary School at 3:45pm on Thursday. Conflicting reports say the helicopter either dropped the box or it just fell out of the aircraft while flying over the school.

The incident did not result in any injuries as classes had finished for the day, a spokesman for the Ysleta Independent School District said, according to local TV station KVIA. The box reportedly caused slight damage to the school roof and a classroom, as well as causing a power outage affecting a portion of the building. 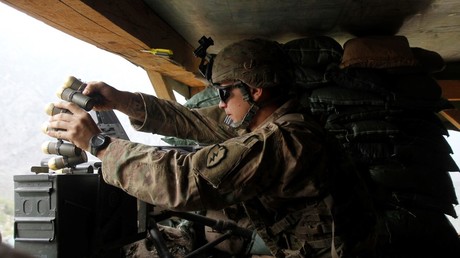 The helicopter had taken off from Fort Bliss military base. Officials have expressed regret over the mishap.

“I’m extremely sorry for any damage done to the neighboring elementary school, and I am grateful that no one was injured,” Commander of the 1st Armored Division Combat Aviation Brigade, Col. Jay Hopkins, said.

Similar incidents involving US Air Force aircraft have recently occurred on the Japanese island of Okinawa, which hosts a large US military presence. Objects, including a metal-framed window, fell on Japanese schools from US military aircraft at least on three occasions, triggering massive protests.

The incidents placed schools on high alert. Students at an Okinawa school close to US Marine Corps Air Station Futenma were advised to take shelter more than 300 times since February, as the military helicopters approached, according to Japanese newspaper Asahi.