Alyssa Milano will not speak at the next Women’s March event, citing her disapproval of the organization’s ties with Nation of Islam leader Louis Farrakhan. Her disavowal, however, has triggered counter-arguments of racism.

In a recent interview, actress, liberal activist and founder of the #MeToo movement, Alyssa Milano, stated that she would not be participating in the next Women’s March, a massive feminist demonstration which was initially organized in opposition to President Trump’s inauguration last year. 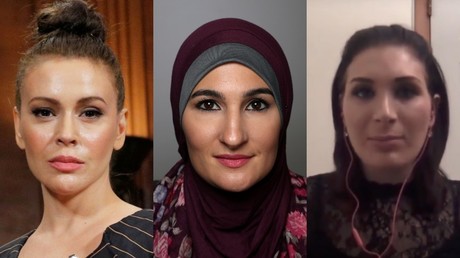 Originally a driving force behind the march, Milano pulled out when the close relationship between its organizers and controversial black nationalist and Islamic leader Louis Farrakhan drew heat from the left and the right.

“Any time that there is any bigotry or anti-Semitism in that respect, it needs to be called out and addressed. I’m disappointed in the leadership of the Women’s March that they haven’t done it adequately”, the actress commented in regard to her decision.

Her disappointment is primarily directed at Tamika Mallory, one of the leaders and organizers of the Women’s March, who has been attending the Nation of Islam’s Savior’s day celebration for 30 years. Farrakhan, the leader of the Nation of Islam, mentioned her from the podium during his speech at the event which took place in Chicago earlier this year. In an Instagram post from the event, Mallory referred to Farrakhan as the “greatest of all time”, and posted photos of herself and co-organizer Carmen Perez posing with him.

Farrakhan’s speech itself was characteristically filled with anti-Semitic invective (“The powerful Jews are my enemy.”) alongside comments that affirmed the Nation’s stone age view on gender and savage opposition to LGBT rights.

Naturally, these ideas did not sit well with many of the pussy-hatted participants of the Women’s Marches.

This time you can’t say you didn’t know about the anti-Semitism of the leaders of the Women’s March. You know. Find some other way to protest Trump and boycott the march, my Monday @nypost column: https://t.co/DfwzDIIMSf

Women’s March organizers quickly responded with tweets distancing themselves from Farrakhan’s positions, but refused or neglected to address their relationship to him.

Anti-Semitism, misogyny, homophobia, transphobia, racism and white supremacy are and always will be indefensible.

Now, proving that anything can be racist in 2018, Milano herself has come under fire, with critics arguing that her whiteness somehow makes her arguments invalid. Lawyer, journalist and author Glenn Greenwald saw Milano’s disavowal as an attempt to force out the march’s organizers based on their skin color. Greenwald, a gay man, was content enough to ignore the Nation of Islam’s description of homosexuality as “an assault on black America,” however.

White actress announces boycott of Women’s March unless its gets rid of the Palestinian-American woman and African-American woman who founded it, or until they recite from the script she demands. https://t.co/X27aQV2puQ

Milano had also been asked by conservative journalist Laura Loomer two weeks beforehand to disavow feminist Muslim activist Linda Sarsour, another Women’s March figurehead. Sarsour once said a critic of Islam who was a victim of female genital mutilation “deserved” to have her vagina taken away, and tweeted in favor of Sharia law. Last year, Sarsour blamed the “Jewish media” for her tainted reputation.

While Milano refused to distance herself from Sarsour at the time, she later came around, and now refuses to participate in the Women’s March as long as both Mallory and Sarsour are involved.

Controversy has stalked the Women’s March activists in recent months. Ice Cream maker Ben & Jerry’s was slammed online for partnering up with the organization to release an anti-Trump themed, ‘Pecan Resist’ flavor two weeks ago. After a storm of criticism, the Vermont company said that while it does not agree with Sarsour “on everything,” it stands by the “work Linda has done to promote women’s rights.”

Who knew that Ben & Jerry’s would align the company with people who idolize the bigot Louis Farrakhan and seek the destruction of Israel. This is just so offensive and hurtful. Sad that I will never ever be able to enjoy Phish Food or any of your other flavors again.