“The Right Sector is the most radical wing of Ukraine’s Maidan protest movement that toppled President Viktor Yanukovych in February.

They are not Neo-Nazis. That misleading designation is part of a propaganda ploy by Moscow to demonize bona fide Ukraine nationalists.

“Critics at home say the party’s inflammatory rhetoric and violence is helping Russian media to depict Ukraine as overrun with “neo-Nazis” who threaten the Russian-speaking population.”

It is worth noting that the BBC contradicts its earlier March 7, 2014 BBC Newsnight report entitled, “Neo-Nazi threat in new Ukraine,” which says exactly the opposite: “xenophobic Jew-hating nationalists, armed and leading the mobs in Kiev”.

According to Prince Charles: “Now Putin is doing just about the same as Hitler”, which indelibly suggests that Moscow rather than Kiev has embraced a neo-Nazi Agenda.

Look at the photos displayed in the BBC’s report. The BBC suggests that these Right Sector thugs are acting responsibly. 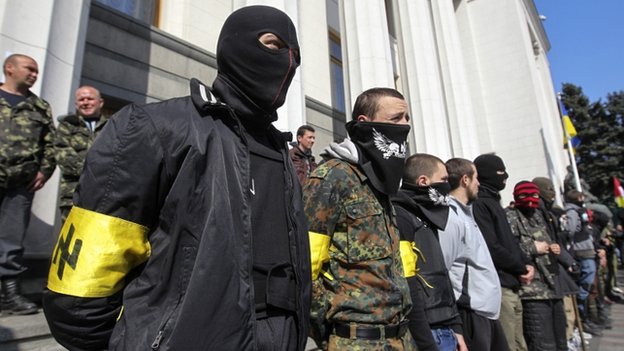 “In late March the Right Sector — seen here outside parliament — clashed with the new Kiev authorities” [BBC image above included in the original article. In fact these militants of are Svoboda Party wearing the revived Nazi S.S.’s “Wolfsangel” (wolf’s hook) insignia]. [see right]

“The Right Sector is trying to portray itself as a responsible party, but enough doubts remain about its attitude and intentions to cause unease in both pro-Kiev and pro-Moscow camps.” [emphasis added] 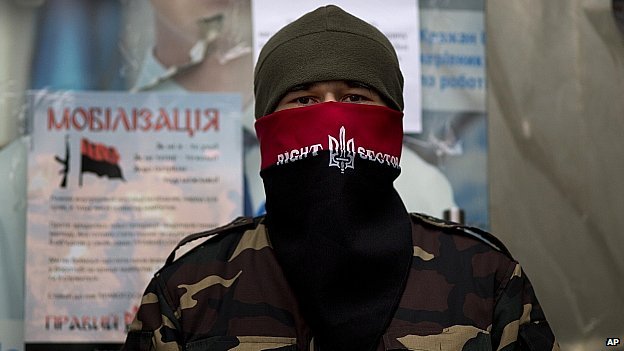 [BBC Photo of a Right Sector Good Guy, included in the original article]

According to the BBC, the Right Sector has no Nazi roots, it was formed as an umbrella group in November 2013:

“Originally set up as an alliance of ultra-nationalist groups in November 2013,the Right Sector is now a party and its leader, Dmytro Yarosh, is running for president…”

The BBC report fails to mention the names of the constituent members of Pravy Sektor: They areTrident (Tryzub), led by Dmytro Yarosh and Andriy Tarasenko, and the Ukrainian National Assembly—Ukrainian National Self Defence (UNA—UNSO), a terrorist paramilitary organization supported covertly by NATO (see image below) and several other right wing paramilitary groups. 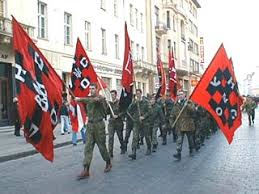 Trident (Tryzub) (Ð¢Ñ€Ð¸Ð·ÑƒÐ±) is an overtly Nazi paramilitary organization founded in 1993 by the Congress of Ukrainian Nationalists, which was set up by former members of the notorious OUN-B, which collaborated with Nazi Germany during World War II.

The BBC mentions the name of Stepan Bandera, but fails to acknowledge that he was instrumental in the killings of Jews, Poles pro-Soviet Ukrainians and Russians at the behest of the Third Reich. According to the BBC, his alleged links to Nazi Germany are part of Russian propaganda:

“Dmytro Yarosh calls himself a follower of Stepan Bandera, a nationalist leader who fought Polish and Soviet rule in the 1930s and 1940s but is seen in Russia and eastern Ukraine as a

Mr Yarosh rejects accusations of racism, saying he regards anyone who fights for Ukraine as a comrade. Right Sector leaders have recently assured the Israeli ambassador that they reject anti-Semitism along with other forms of chauvinism and xenophobia.” [emphasis added]

Moscow is demonizing Right Sector and Svoboda, according to the BBC.

Meanwhile, Right Sector has been involved in a hate campaign against Kiev’s Jewish Community, an issue which neither the BBC nor the Israeli media consider newsworthy. There is no history in the BBC’s narrative. There is deliberate distortion and omission, with a view to misleading public opinion. Stepan Bandera’s links to World War II atrocities are well documented by scholars and historians.  Jews were the target of the Third Reich’s Einsatzgruppen (Task Groups or Deployment Groups) which were supported by Stepan Bandera’s OUN-B.

Under the militant leadership of Stepan Bandera in World War II, the ultra-nationalists organized the Ukrainian Waffen SS Galician, Nichtengall, and Roland Divisions that collaborated with the Nazis and were responsible for the genocide of over 500,000 people. Following the war, however, Ukrainian Nazis were the only group to escape trial at Nuremburg for crimes against humanity.

By ignoring the World War II legacy of Stepan Bandera’s OUN-B and casually describing him as a anti-Soviet Nationalist, the BBC is tacitly involved in what is described “holocaust denial”. The OUN-B was complicit in crimes of Nazi Germany. See  Ukraine’s Neo-Nazis. Stepan Bandera and the Legacy of World War II. George Eliason, Global Research March 17, 2014) While the Western media including the BBC has not covered the issue, the contemporary Neo-Nazi threat against the Jewish community in the Ukraine is real.

The contemporary Neo-Nazi Svoboda Party as well the Right Sector follow in the footsteps of the OUN-B, which was responsible for acts of genocide directed Jews, Poles, Russian and pro-Soviet Ukrainians. Michel Chossudovsky is an award-winning author, Professor of Economics (emeritus) at the University of Ottawa, Founder and Director of the Centre for Research on Globalization (CRG), Montreal and Editor of the globalresearch.ca website. He is the author of The Globalization of Poverty and The New World Order (2003) and America’s “War on Terrorism”(2005). His most recent book is entitled Towards a World War III Scenario: The Dangers of Nuclear War (2011). He is also a contributor to the Encyclopaedia Britannica. His writings have been published in more than twenty languages.