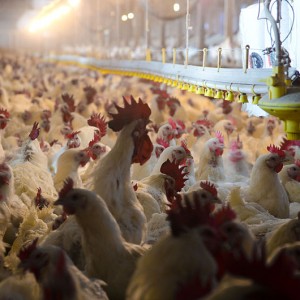 Do you know what is in your chicken nuggets? Thanks to Barack Obama, that is going to be a more important question than ever. At the end of August, the Obama administration quietly decided to start allowing Chinese poultry processors to ship processed chicken into the United States. For now, the meat must originate either in the United States or in another country where the poultry population has been certified to be safe. What that means is that chickens from the United States will be shipped all the way over to China, processed in plants over there, and then shipped back across the Pacific Ocean for us to eat. Only a limited number of companies are expected to take advantage of this, but according to U.S. Senator Charles Schumer, a USDA report that Congress has seen indicates that China will likely be allowed to directly import their own chickens into this country “within a year“. What makes all of this even more disturbing is that a country-of-origin label will not be required on any of the chicken that is processed in China. So in the years ahead you could be eating chicken processed in China and not even know it.

Each year, U.S. consumers spend about 70 billion dollars on chicken. That is a tremendous amount of money, and the U.S. chicken industry supports a huge number of jobs.

So what is going to happen if cheap chicken from China starts flooding the market?

It shouldn’t take too much imagination to figure out what is going to happen. This is a movie that we have seen too many times before. Over the past decade, tens of thousands of U.S. businesses and millions of good paying jobs have been lost due to “competition” from communist China.

Barack Obama continues to talk a good game about how he wants to “create jobs” for American workers, but just about everything that he actually does kills even more of our jobs.

Under tremendous pressure from both China and the beef industry, Obama decided in late August to open up the door for processed chicken from China. The following is a brief excerpt from a recent Examiner article…

As early as next summer, chicken nuggets and other chicken products (such as canned soup, frozen chicken wings and breaded chicken patties) made from chicken processed in China could be sold in grocery stores around the country.

Under the proposal, chickens that are raised and slaughtered in the U.S. and Canada will be sent to China for processing and then returned to the U.S. for mass consumption.

This was a recent decision made by President Barack Obama to address a decade-long trade dispute. Since 2003, China has refused to import U.S. beef, citing concerns over mad-cow disease, so we’re effectively trading chickens for beef in this quid-pro-quo political scenario. Obama has been widely criticized over this move.

This would be bad enough even if U.S. consumers were able to identify the chicken that is coming in from China. But according to Politico, there will be no requirement that chicken processed in China be labeled as such…

Well, for starters Chinese-processed chicken will be allowed to skip the ‘Product of China’ label in several instances because the country of origin labeling law, or “COOL,” does not regulate cooked meat – and at least for now, the U.S. does not import raw chicken raised and/or slaughtered in China.

A lot of people are very upset about this because there have been some huge safety concerns about food coming from China. Just check out the following examples included in a recent Huffington Post article…

Among those critics is Tony Corbo, a senior lobbyist for the advocacy group Food and Water Watch. “This is the first step towards allowing China to export its own domestic chickens to the U.S.,” he told the Times.

Corbo has reason to be concerned; in the last months alone, Chinese police discovered an illegal food smuggling plot to sell 46-year-old chicken feet treated with bleach, a criminal ring accused of selling rat and fox meat as lamb and abnormally high levels of cadmium, a metal that can cause cancer and other illnesses, in rice sold in Guangzhou restaurants.

USDA officials halted imports of Chinese shrimp, eel, catfish and carp in 2007 because of high levels of illegal antibiotics and chemicals. Three years later, officials seized thousands of pounds of Chinese honey after finding illegal antibiotics. And this year, more than 500 dogs and a handful of cats died after eating jerky treats made of chicken, according to an investigation by the U.S. Food and Drug Administration.

In light of all of these incidents, shouldn’t U.S. consumers be able to clearly identify chicken that is coming from China?

Authorities tell us that we can expect to have chicken from China starting to show up on our store shelves this upcoming summer. Apparently, the big advantage of processing chicken in China is the lower cost…

Processing chicken is a labor-intensive endeavor that can’t be done solely by machines and the “lower cost in China is the advantage,” Chris Hurt, a professor of agricultural economics at Purdue University in West Lafayette, Indiana, said in a telephone interview. Those savings in labor costs can counterbalance the higher price tag to ship the end product, Hurt said.

And most Americans don’t realize this, but China already sends 4 billion pounds of food to the United States every year.

So why don’t we just go ahead and get it all over with and just send all of our jobs over to China right now?

After all, very few people seem to be concerned about the fate of average American workers at this point. Things just continue to get even worse for them, and the middle class is being absolutely eviscerated.

Let’s just go ahead and ship the rest of our good paying jobs over there and be done with it. Then we can all cut hair, flip burgers and stock shelves at Wal-Mart.

And most Americans already know that something has gone terribly wrong with our economy.

We are a nation that is absolutely drowning in debt, that has a financial system that has been turned into a high stakes casino, and that has a middle class that is being systematically destroyed.

Personally, I am extremely concerned about this upcoming two year time period. The conditions for a “perfect storm” are all coming together for 2014 and 2015. I believe that this nation (and the world) will look far different two years from now than it does today.

Our system is failing and our politicians are only making things worse.

Buckle up and hold on to your hats, because the next couple of years are going to be a very bumpy ride.