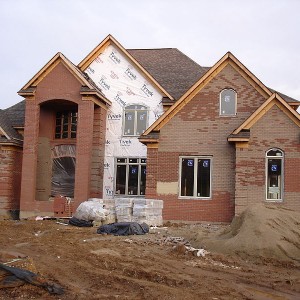 One of the things that this era of American history will be known for is conspicuous consumption. Even though many of us won’t admit it, the truth is that almost all of us want a nice vehicle and a large home. They say that “everything is bigger in Texas”, but the same could be said for the entire nation as a whole. As you will see below, the size of the average new home has just hit a brand new record high and so has the size of the average auto loan. In the endless quest to achieve “the American Dream”, Americans are racking up bigger debts than ever before. Unfortunately, our paychecks are not keeping up and the middle class in the United States is steadily shrinking. The disparity between the lifestyle that society tells us that we ought to have and the size of our actual financial resources continues to grow. This is leading to a tremendous amount of frustration among those that can’t afford to buy expensive cars and large homes.

I remember the days when paying for a car over four years seemed like a massive commitment. But now nearly a quarter of all auto loans in the U.S. are extended out for six or seven years, and those loans have gotten larger than ever…

In the latest sign Americans are increasingly comfortable taking on more debt, auto buyers borrowed a record amount in the first quarter with the average monthly payment climbing to an all-time high of $474.

Not only that, buyers also continued to spread payments out over a longer period of time, with 24.8 percent of auto loans now coming with payment terms between six and seven years according to a new report from Experian Automotive.

That’s the highest percentage of 6 and 7-year loans Experian has ever recorded in a quarter.

Didn’t the last financial crisis teach us about the dangers of being overextended?

And because we are taking out such large auto loans that are extended out over such a long period of time, we are now holding on to our vehicles much longer.

According to CNBC, Americans now keep their vehicles for an average of six years and one month.

Ten years ago, it was just four years and two months.

My how things have changed.

And consumer credit as a whole has also reached a brand new all-time record high in the United States.

Consumer credit includes auto loans, but it doesn’t include things like mortgages. The following is how Investopedia defines consumer credit…

Consumer credit is basically the amount of credit used by consumers to purchase non-investment goods or services that are consumed and whose value depreciates quickly. This includes automobiles, recreational vehicles (RVs), education, boat and trailer loans but excludes debts taken out to purchase real estate or margin on investment accounts.

As you can see from the chart below, Americans were reducing their exposure to consumer credit for a little while after the last financial crisis struck, but now it is rapidly rising again at essentially the same trajectory as before… 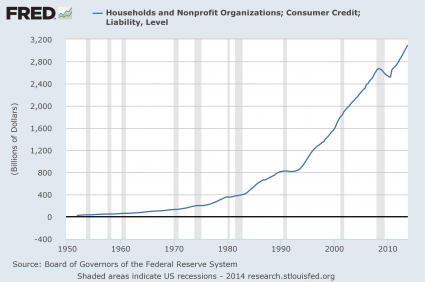 Have we learned nothing?

Meanwhile, America also seems to continue to have an insatiable demand for even larger homes.

According to Zero Hedge, the size of the average new home in the United States has just hit another brand new record high…

There was a small ray of hope just after the Lehman collapse that one of the most deplorable characteristics of US society — the relentless urge to build massive McMansions (funding questions aside) — was fading. Alas, as the Census Bureau today confirmed, that normalization in the innate desire for bigger, bigger, bigger not only did not go away but is now back with a bang.

According to just released data, both the median and average size of a new single-family home built in 2013 hit new all time highs of 2,384 and 2,598 square feet respectively.

And while it is known that in absolute number terms the total number of new home sales is still a fraction of what it was before the crisis, the one strata of new home sales which appears to not only not have been impacted but is openly flourishing once more, are the same McMansions which cater to the New Normal uberwealthy (which incidentally are the same as the Old Normal uberwealthy, only wealthier) and which for many symbolize America’s unbridled greed for mega housing no matter the cost.

There is certainly nothing wrong with having a large home.

But if people are overextending themselves financially, that is when it becomes a major problem.

Just remember what happened back in 2007.

And just like prior to the last financial crisis, Americans are treating their homes like piggy banks once again. Home equity lines of credit are up 8 percent over the past 12 months, and homeowners are increasingly being encouraged to put their homes at risk to fund their excessive lifestyles.

But there has been one big change that we have seen since the last financial crisis.

Lending standards have gotten a lot tougher, and many younger adults find that they are not able to buy homes even though they would really like to. Stifled by absolutely suffocating levels of student loan debt, many of these young adults are putting off purchasing a home indefinitely. The following is an excerpt from a recent CNN article about this phenomenon…

The Millennial generation is great at many things: texting, social media, selfies. But buying a home? Not so much.

Just 36% of Americans under the age of 35 own a home, according to the Census Bureau. That’s down from 42% in 2007 and the lowest level since 1982, when the agency began tracking homeownership by age.

It’s not all their fault. Millennials want to buy homes – 90% prefer owning over renting, according to a recent survey from Fannie Mae.

But student loan debt, tight lending standards and stiff competition have made it next to impossible for many of these younger Americans to make the leap.

This is one of the primary reasons why homeownership in America is declining.

We live in a debt-based system which is incredibly fragile.

We experienced this firsthand during the last financial crisis.

But we just can’t help ourselves.

We have always got to have more, and society teaches us that if we don’t have enough money to pay for it that we should just go into even more debt.

Unfortunately, just as so many individuals and families have found out in recent years, eventually a day of reckoning arrives.

And a day of reckoning is coming for the nation as a whole at some point as well.

You can count on that.