If the Labour government was serious about trying to recover the missing CDs in the ongoing HMRC Child Benefit centralised database insecurity scandal, then why have they not offered a large financial reward and immunity from prosecution for the safe return of the discs ? That would not re-assure us that the data has not been copied, but it might indicate a change in the contemptuous attitude with which the politicians and senior civil servants treat the general public.

Until such a change is apparent, then what can you do, personally, to try to stand up for your own rights and those of your family, against the Kafkesque, inept and secretive bureaucracy and political apparat which seems to have inflitrated our society ?

Obviously the non-partisan NO2ID Campaign would welcome a financial donation from you (to their general campaign funds or to their ring fenced Legal Defence Fund).

Today, the NO2ID Campaign has launched a new public Pledge, which involves asking for your commitment, common sense, in defence of your own self-interest, that of your family and of the country as a whole. Help to oppose the wretchedly mis-conceived and counter productive particular mess of a centralised national biometric database, the National Identity Register, which the Government is attempting to impose on us:

“This is real people saying: ‘No, we’ve had enough. We are sick of the government snooping into our private lives, leaking or losing our most confidential personal information, and trampling the individual liberty that made this country what it is. It has to stop.’ 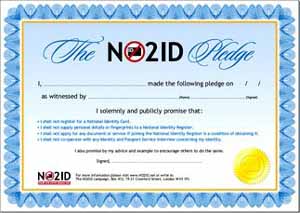 Note: You don’t have to download the certificate to take The NO2ID Pledge. It doesn’t have to be done online, and can be done anywhere.Please feel free to copy and distribute the text (below) by any other means. But please do not change the wording, which has been written by an expert in the National Identity Scheme. For best effect everyone should make the same undertaking.

I, made the following pledge on , as witnessed by :

I solemnly and publicly promise that:

I also promise by my example to encourage others to do the same.

What YOU can do to stop ID cards and the database state:

The government thinks it is being clever. It will be registering people on the ID cards database when they apply for a passport or other official documents. You may have heard that the ID card is “voluntary”, but once your details are entered onto the ‘National Identity Register’ database they are there for life.It is not just about a card. Once the details of your life are captured the government will be sharing them with and between an ever growing list of agencies and building an ever more detailed picture of your life. The HMRC disaster with child benefit records has shown just how dangerous that can be.

Millions of people now know that having their identity “managed” by the government is a bad idea. In just four weeks in 2005, more than 10,000 people pledged online to refuse to register for an ID card. You may have seen public figures declaring that they will go to prison rather than be registered.

The NO2ID Pledge is your opportunity to make a personal and public declaration that you will refuse to comply with government control of your identity. Keeping this promise means you avoid registration on the National Identity Register. It is a serious commitment. Though at the moment there is little to resist, the government is going to try and make life gradually more inconvenient if you don’t comply “willingly”. But with tens of thousands of others making the same declaration, life could get pretty inconvenient for the government too.

It is currently perfectly lawful to declare that you will not comply with the ID scheme. It is possible that refusal could be made a crime, but the government has shied away from that so far. If enough people say no, it will be impossible. There would not be enough courts to prosecute 100,000 resisters, let alone millions. Together, now, we can build a wedge of opposition that will jam the wheels of the ID scheme, and protect the personal privacy of everyone in the country.

The more people who commit themselves to resist, the more effective it is. Say no to ID and it becomes more difficult to put pressure on you and everyone else. Get your friends to pledge too, and everyone protects one another. If you say no, then ID cards will fail.