I’ve been writing for many years about US-NATO efforts to militarily surround Russia.

The oil-i-garchy wants to get a hold of the natural gas (the world’s largest supply) that sits on Russian territory. It also wants full control of the Arctic region now that climate change will make it possible to drill for oil there. Russia has a huge northern coastal border with the Arctic and thus stands in the way of western oil control.

Already the war drums are sounding after Russia moved more troops into Crimea to protect its Navy base and the large pro-Russian population in the region. [map: pro-Russian vs. pro-European regions] 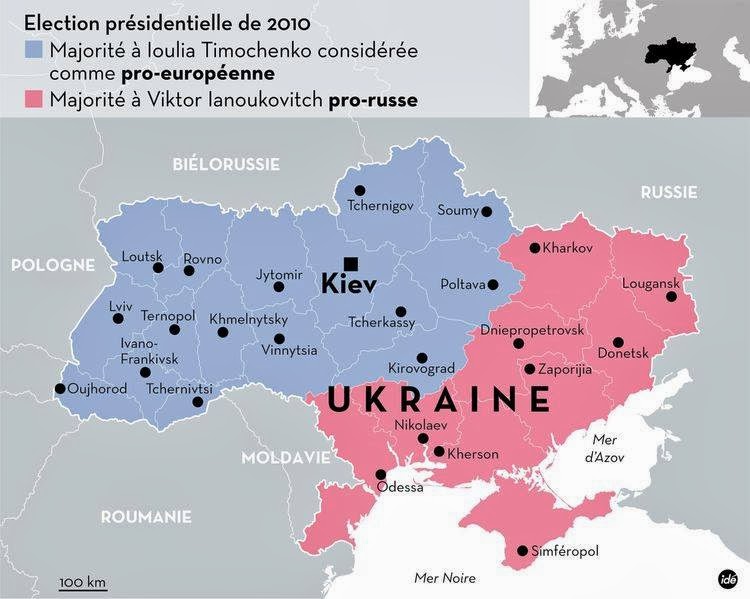 Writing yesterday in Foreign Policy Admiral James Stavridis (Ret) called for NATO to immediately increase” all intelligence-gathering functions through satellite, Predator unmanned vehicles, and especially cyber” and to sail “NATO maritime forces into the Black Sea and setting up contingency plans for their use.” This is full-blown war talk — with Russia. Admiral Stavridis was Supreme Allied Commander at NATO from 2009 to 2013. He is currently dean of the Fletcher School of Law and Diplomacy at Tufts University.

If Stavridis is saying these things you can just imagine what plans are underway inside the Pentagon and at NATO HQ in Europe.

The Russians know that they are being set up. Reporting for Asia Times, Pepe Escobar wrote,

” Even before neo-con Victoria ‘fuck the EU’ Nuland’s intercept, [Russian intelligence] had already identified the wider mechanics of the CIA-style coup — including Turkish intelligence financing Tatars in Crimea… And what will the Tatars in Crimea do? Stage a jihad? Wait: the “West” will surely try to FINANCE THIS JIHAD.”

It’s Syria all over again, this time right on the Russian border.

Except this time the US-NATO are messing with a country that has the capability to fight back. This is how world wars get started. The Russians are not going to idly sit by and watch US-NATO set up a right-wing fascist state right on their border.  Hitler tried that during WW II and at least 20 million died defending the Soviet Union. Ever since then the Russian people have been ‘sensitive’ about defending their immediate borders.

The decision adopted on March 1, by the Federation Council, upper house of the Russian parliament, which allows Putin to send troops to Crimea, an autonomy within neighboring Ukraine, aims to protect life and security, Irina Yarovaya, chair of the Security and Anti-Corruption Committee in the State Duma (lower house of parliament), said.

“Terrorism is the most dangerous crime around the world. But it is fascism and terrorism that have proclaimed their power in Ukraine and pose a real threat to the life and security of Russian citizens living in Ukraine and undoubtedly to the brotherly people of Ukraine,” she said.

“We have repeatedly warned the international community and the US against interfering in the internal affairs of Ukraine,” she said, adding “some European and US politicians bear direct responsibility for the crisis in Ukraine, for the bloodshed and for the coup.”

She believes that Obama’s latest statement on Russia “has fully exposed the US policy of brutal interference in the sovereign rights of other countries and aggressive imposition of its interests.”

Of course the Obama administration is saying that Russia is violating international law by moving more troops into Crimea. Obama is threatening Russia with “severe consequences”. And now you can be sure that NATO is indeed preparing ‘contingency plans’.

The open question is how will the American people react to all of this. They rightly opposed Obama’s desired cruise missile attack on Syria. Will they be as wise about planting the cancerous NATO flag on Crimean soil?

Clearly Putin and Russia have been thoroughly demonized in the passive minds of most American citizens. But will they shake the cobwebs from their brains and see the absurdity and sheer recklessness of US-NATO saber rattling on the doorstep of Mother Russia?

Now is the time for all peaceful people to speak out. Before the real shooting starts.