Ewen MacAskill in Washington and Robert Tait in Tehran
The Guardian 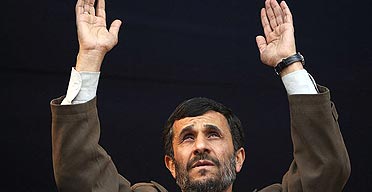 Iran’s president Mahmoud Ahmadinejad addresses thousands of people at a rally in the city of Ilam. Photograph: AFP/Getty Images

The US intelligence U-turn on Iran was partly based on telephone conversations in Iran intercepted by the British intelligence listening station GCHQ, according to a source in Washington speaking on a basis of anonymity.In an updated assessment of Iran published on Monday, the US intelligence agencies concluded that the country had ceased work on a nuclear weapons programme four years ago, in contrast with its assessment in 2005 that the country was pushing ahead with its weapons programme.

George Bush said on Tuesday that the decision to change the assessment was based on “a great discovery”. Diplomatic and official sources in the US said this was mainly based on human intelligence, almost certainly a major defector, but that intercepts were also a factor.According to the source, there was a lengthy time-lag between the conversations being intercepted by GCHQ and the US intelligence agencies checking out whether they were genuine or whether those involved knew they were being listened to and put out false information.

In remarks to the press yesterday, Bush reiterated his warning that, in spite of the new intelligence assessment, Iran remained a threat and Tehran faced a choice between negotiation or isolation.

The president said that the secretary of state, Condoleezza Rice, had been in touch with Britain and France to discuss a push for a new round of UN sanctions against Iran.

The questions came against a background of speculation, particularly among bloggers, that the intelligence community put out the assessment to pre-empt a military strike being ordered by Bush and the vice-president, Dick Cheney, next year.

Fratto refused to say how much detail McConnell had provided in August. “What director McConnell said is that we’re going to go back and do rigorous analysis of this intelligence, and when we can be certain of it, we’re going to come back and talk to you – and that’s what they did,” he said.

The conclusions of the national intelligence estimate, the consensus view of the 16 US intelligence agencies, are largely supposed to be independent of the White House. But, contrary to the speculation among bloggers about mutiny by the intelligence community, the president retains control over whether and when the estimates are published. There is a long list of other estimates that Bush has determined should remain classified.

The Iranian president, Mahmoud Ahmadinejad, basked in the “great victory” of the US intelligence report.

“Today the Iranian nation is victorious but you [the west] are empty handed,” he said in a speech to a rally in the western city of Ilam. “This was a final shot to those who, in the past several years, spread a sense of threat and concern in the world through lies of nuclear weapons. If you want to start a new political game the united Iranian nation will resist you and will not retreat one iota from its nuclear programme.”

However, Ali Larijani, Iran’s former chief nuclear negotiator, who resigned in October over policy differences with Ahmadinejad, cautioned against seeing the report as a triumph and warned that it might presage a new phase of US pressure.

“The report refers to Iran’s 2003 voluntary suspension of uranium enrichment, which we undertook to build trust, as resulting from threats and pressure,” Larijani said. “This means they have got the wrong impression from Iran’s [previous] suspension of enrichment. The intention of this part of the report is to claim that if we want Iran now to abandon its nuclear plan we should impose the policy of pressure again.”