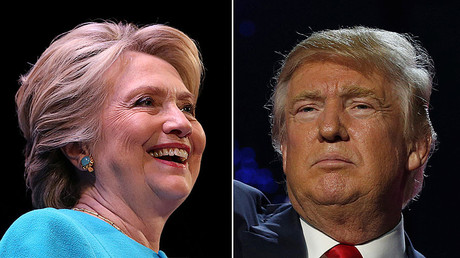 Ahead of tonight’s presidential debate, polls show over half of American voters are pessimistic about the candidacy of both Clinton and Trump. The debate comes after a week of women accusing Trump of sexual misconduct and a barrage of hacked emails from the Clinton campaign.

The third and final debate between Hillary Clinton and Donald Trump is the last chance for the candidates to present their arguments before tens of millions of voters.

The debate is the last opportunity for Trump to turn the race around, after his repeated questioning of the legitimacy of the election and his predictions it will be stolen through media bias and massive voter fraud.

Clinton’s campaign has its own challenges – including a massive release of hacked campaign emails – and despite the electoral map leaning in her favor, she faces questions about her authenticity and trustworthiness.

Trump’s campaign manager has acknowledged the Republican presidential nominee needs a “comeback” in the final weeks of the campaign.

Kellyanne Conway said the billionaire property tycoon had pulled off comebacks before, and told Fox News on Wednesday she doesn’t understand why Hillary Clinton hasn’t been able to “put him away,” given her experience and her campaign’s “endless amount of money.”

“What is her problem, already?” said Conway.

Coverage of the hacked emails from the Clinton campaign has been less than that of the Trump sex scandals, but the emails are sure to be mentioned in the debate.
New releases show that Clinton staffers made super PACs an integral part of her campaign, according to the Intercept. That would be a violation of the Supreme Court’s 2010 Citizens United decision, which ruled that super PACs are allowed to accept unlimited donations on the condition the money is spent independently of specific campaigns.

Will Clinton use tonight’s debate to continue her strategy of disqualifying Trump, or can she make an affirmative case for herself? She might be leading in the polls, but her ratings on trustworthiness remain poor.

Nevada is one of three battleground states in this year’s election, along with North Carolina and Ohio. In Nevada, 46 percent of voters say they back Clinton and 44 percent say they support Trump, according to CNN. North Carolina voters are evenly split between the two party candidates, but Ohio is more solidly a Trump state, with 48 percent likely to back him compared to 44 percent supporting Clinton.

The Trump campaign has invited President Barack Obama’s half-brother, Malik Obama, an American citizen, to be in the audience for the showdown on Wednesday. Malik Obama supports Trump’s candidacy.

Malik Obama told the New York Post he does not believe the women who have come forward to accuse Trump of sexual misconduct, asking “Why didn’t they come forward before?” He found fault with Hillary Clinton’s work as secretary of state, claiming former Libyan leader Muammar Gaddafi had been a friend, and adding, “Check out the situation in Libya now.”

The debate will be broadcast from the University of Nevada, Las Vegas, at 9pm Eastern, and will be hosted by Fox News moderator Chris Wallace, with live coverage from RT America.