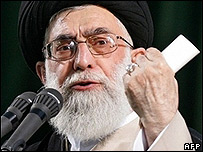 Speaking at Friday prayers, Ayatollah Ali Khamenei said he was sure President Bush would be tried in an international court for what had happened in Iraq.

It was a particularly tough message, accusing the US of invading Iraq partly to undermine Iran’s Islamic system.

It follows Mr Bush’s speech to the US on Thursday in which he criticised Iran’s ambitions in the Middle East.

Ayatollah Khamenei said the US had been defeated in its plan for the Middle East, and he went on to talk of the complete defeat of the United States in its plan to weaken Iran.

He said he was convinced President Bush would be tried in an international court for what he had done in Iraq – and even likened him to Hitler and Saddam Hussein.

“Americans will have to answer for why they don’t end occupation of Iraq and why waves of terrorism and insurgency have overwhelmed the country,” he said.

These strong comments suggest that the Supreme Leader is giving his full backing to President Ahmadinejad in the confrontation with the West over Iran’s nuclear programme.

President Ahmadinejad has said several times that he believes the dispute over the nuclear plan is now over; this is a very similar message from Iran’s Supreme Leader.