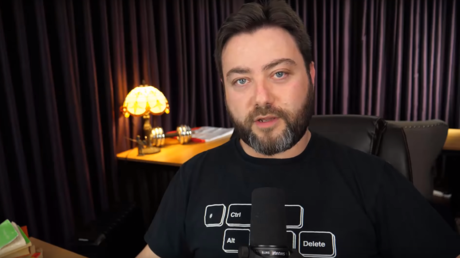 The UK Independence Party picked popular YouTuber and political commentator Carl Benjamin (‘Sargon of Akkad’) for its MEP ticket. If he wins the seat, he vows to fight for Brexit and expose shady workings of the EU establishment.

Benjamin, better known under his YouTube moniker, will be campaigning for Britain’s seat at the European Parliament from South West England, he told his near-million subscribers on Friday. The self-described “office worker and amateur game developer turned successful political commentator” is running for UKIP, the Eurosceptic nationalist party that took a rightwing turn last year under the leadership of Gerard Batten.

If he wins the election, Sargon of Akkad promises to use his seat in the European Parliament to finally give Britain what it voted for in the 2016 referendum – an exit from the EU. He also pledged to fight the controversial Article 13 of the Copyright Directive – which critics say makes online memes illegal – undermine EU’s influence over national governments of member states, fight “all manifestations of radical leftism” and expose them to the audience of his YouTube channel. He also plans to oppose mass immigration into Europe.

Benjamin is among the more controversial figures on YouTube, having a years-long record of actions, which critics call harassment of his opponents. In the past, he mocked people like activist Anita Sarkeesian, who promotes feminist ideas and in particular fights perceived exploitation of female characters in video games. Critics call him a women-hating “anti-progressive.” He and his supporters view such advocacy as “political correctness gone mad” and trolling as a legitimate mode of debate.

In 2016, Benjamin was noticed by the general British public after getting involved in a scandal while arguing with Labour MP Jess Phillips. Phillips and Benjamin sparred online over her campaign against misogyny on social media. At one point the MP complained about receiving rape threats, to which Benjamin responded: “I wouldn’t even rape you.” This set off an avalanche of rape-related tweets targeting Phillips.

Last year, Benjamin got involved in a stand-off with Antifa protesters, who disrupted a scheduled discussion at King’s College’s Libertarian Society. They set off smoke bombs, broke windows and otherwise acted out to stop the event. Benjamin came out of the confrontation with a torn Antifa flag, a trophy that he later displayed proudly in one of his videos.

Among the latest videos on his channel is a message of support for WikiLeaks founder Julian Assange, who was arrested this week by the British authorities, a sarcastic remark on the decision of videogame giant Blizzard to ban the OK sign over its alleged link with white supremacist ideology, and a critique of identity politics.