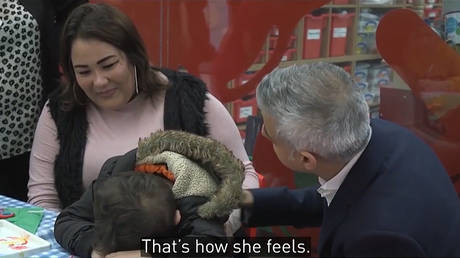 London Mayor Sadiq Khan poked fun at Theresa May on a visit to a children’s hospital, remarking that a somewhat jaded and fed up looking child reminded him of the beleaguered UK PM, adding: “That’s how she feels.”

The mayor made the joke while meeting parents and children at Evelina London Children’s Hospital to mark the launch of his Ultra Low Emission Zone (ULEZ) – an initiative to cut the capital city’s pollution levels.

It comes as the prime minister attempts to acquire Brexit concessions from two of the EU’s top power players – German Chancellor Angela Merkel and French President Emmanuel Macron – on Tuesday.

The day didn’t start very well for May. Upon arriving in Berlin, she emerged from her car and found that Chancellor Merkel had not shown up to greet her.

The uncomfortable moment didn’t go unnoticed by the UK media, with BBC Berlin correspondent Jenny Hill pointing out on Twitter that Merkel normally waits on the red carpet to greet guests, but was nowhere to be found when May stepped out on Tuesday.

May will head to an emergency EU meeting in Brussels on Wednesday when all member states will vote on an extension to Article 50 to further delay Brexit.