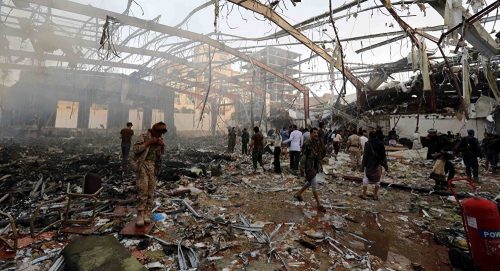 In October 2016 Saudi Arabia struck a funeral hall in Sanaa twice in a space of minutes, killing over 150 people.

Almost three years have passed since Saudi Arabia announced it was intervening militarily, with its allies, in Yemen, to remove the Houthis (officially called Ansar Allah) from power after they had taken over the capital. Western analysts saw it as a bold move from recently-empowered (deputy) crown prince Mohammad bin Salman (MbS), weapons manufacturers and their political representatives were delighted. But what had been predicted as a swift military operation has turned into a humiliating stalemate. Unable to impose its will by force, Saudi Arabia and its bold prince have resorted to war crimes and collective punishment, imposing a humanitarian catastrophe on the Yemeni people.

The lack of media interest makes it seem like a crisis unfolding in slow motion. But that is only because outrage and compassion are now meant to be weaponised when they can be useful in justifying imperialist interventions. For the Yemeni people the agony is real and there is no escaping it. In what was already the poorest country in the region, the Saudi-led bombings of infrastructure and the blockade imposed on Yemeni ports have left millions on the brink.

According to UN estimates, 17 million Yemenis, more than 60% of the population, are in urgent need of food. Out of these, 7 million are facing famine. The destruction of infrastructure has also left 15 million…