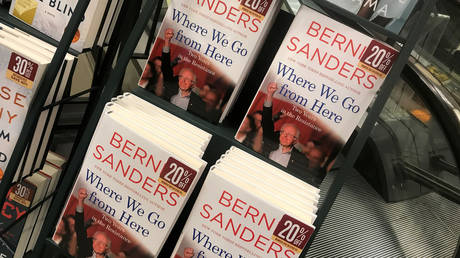 Socialist Senator Bernie Sanders – known for railing against the super-rich – is now a millionaire himself, and shared his moneymaking secrets with America. Sanders was flooded with accusations of hypocrisy in return.

Bernie Sanders, currently a top contender for the Democratic Party’s nomination for the presidency next year, is not a man usually associated with wealth. Indeed, the Vermont Senator has lobbied for higher taxes on “millionaires and billionaires” for his near four-decade political career, and often chose to fly coach during the early days of his 2016 campaign.

Well, if you can’t beat ‘em, join em. Sanders told the New York Times on Tuesday that he is now a member of the two comma club, thanks to a Senator’s six-figure salary and a bestselling book; 2018’s ‘Where We Go From Here.’

Simple? Maybe. Sanders’ advice was lost on conservatives, who bashed the proud socialist for dabbling in capitalism on the side. Not only did Sanders get rich by flogging his hardback call-to-action, he flogged it on Amazon, whose owner Jeff Bezos has been a frequent target of Sanders’ anti-rich polemics.

Is there a bigger fraud in politics than Bernie Sanders? This fraud spends the entirety of his waking hours lashing out at successful millionaires he’s never met while reluctantly having to acknowledge he’s a millionaire too. This guy is a Lt. General in the fraud brigade. #Fraudhttps://t.co/8G2R1rKbNo

Sanders’ supporters came to his defense. Being a millionaire and still lobbying for higher taxes on the wealthy is “the coolest,” one argued.

Centrists think Bernie Sanders wanting to raise taxes on millionaires despite being one himself makes him a hypocrite, when actually being a class traitor against the wealthy is THE COOLEST thing you can be.

If that’s really all he was ashamed of about his tax returns, his secrecy was for nothing. I don’t care. We can move on.

There’s a difference between 1 million and 50 million. Hardly strange that someone making a senator’s salary for as long as he has would have saved that kinda money https://t.co/yOArZpjb0W

Sanders’ disclosure came ahead of his decision to release the last 10 years of his tax returns in the coming days. The socialist senator called on President Trump to do the same and insisted that his own wealth pales in comparison to Trump’s.

“Not being a billionaire, not having investments in Saudi Arabia, wherever he has investments, all over the world, mine will be a little bit more boring,” Sanders said.

Four of Sanders’ 2020 competitors have already made their tax returns public. Senators Kirsten Gillibrand, Amy Klobuchar, and Elizabeth Warren have all disclosed their earnings, as has Washington Governor Jay Inslee.