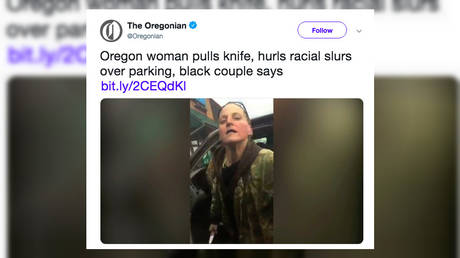 A knife-wielding woman unleashed a racist diatribe on a young black couple as a dispute over a parking space spiraled out of control in Oregon on Christmas Eve.

Footage of the extremely un-festive encounter has been uploaded to Facebook by one of the people on the receiving end of the threats and insults, Emora Robinson.

The 20-year-old told The Oregonian that the incident kicked off moments after she and her family pulled into the parking lot in McMinnville. Roberson said she was traveling with her boyfriend, her aunt, and her 15-month-old daughter when the family stopped at a strip mall to pick up a last-minute Christmas gift.

They pulled in next to a pickup truck and their “crooked” parking caused the pickup’s driver to begin hurling racist insults at the family.

“My daughter was fast asleep, and this woman was basically trying to get into our car,” Roberson told the newspaper. When the ranting woman pulled out a knife Roberson began recording the interaction on her phone.

The footage shows the woman yelling out racial slurs to the family. “This b***h is really trying to stab him [Roberson’s boyfriend],” Roberson can be heard saying, prompting the knife-wielding woman to interject.

“No I ain’t trying to stab nobody, it’s called self-defense you stupid n***er b***h,” she says before slamming the car door on Roberson. “You’re racist as f**k,” the young mother responds.

The video cuts off with the woman yelling out, “see what f**king happens you goddamn n***er.”


“We eventually drove off. We still had Christmas shopping to do,” Roberson explained. “My daughter woke up and was crying her head off.”

The family reported the encounter to the McMinnville police and the case is currently under investigation.

Roberson said the insults and threats didn’t bother her as much as the fact her daughter witnessed the attack. “I don’t know who made her so mad that day,” she said. “That wasn’t any way to talk to me or talk to someone in front of a child.”