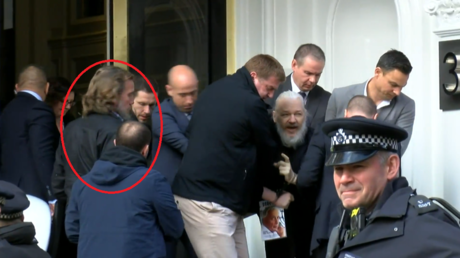 As UK police were waiting for the go-ahead to arrest WikiLeaks founder Julian Assange, undercover officers loitering around the Ecuadorian embassy were not doing a very good job evading attention.

Supporters of Assange gathered near the embassy in London in the days prior to his arrest after WikiLeaks, citing a source in Ecuador’s government, said on Twitter that they were expecting Assange to be expelled from the building imminently.

The supporters began to notice some peculiar activity and some of the faces hanging around the area became familiar. So familiar in fact that they were able to recognize them when they popped up in footage of the 47-year-old’s arrest on Thursday.

Also on rt.com
Exposing ‘collateral murder’ and mass surveillance: Why the world should be grateful to Assange


Speaking to RT, journalist Cassandra Fairbanks recounted the peculiar activity she saw while staking out the stakeout.

Fairbanks witnessed a silver car sitting outside the embassy for 20 hours. The car was continuously manned by shifts of people that rotated approximately every six hours. At one point Fairbanks approached the people sitting in the car but her questions were met only with covered faces and silence.

Walk up to one of the “undercover” cars staking out the Ecuadorian embassy in London. This particular car has seen three shifts of different pairs of people over the last twenty hours. Engines running, lights on. Watcher makes call under head cover. pic.twitter.com/e778EN0nU6https://t.co/cPfdib4kat

Fairbanks also told RT about two men they confronted who declined to say whether they were law enforcement officers and even denied knowing what WikiLeaks was. The men were then seen front and center when Assange was carried out of the embassy on Thursday.

This is one of the guys who was arresting Julian. So many people tried to tell me I was crazy and that they weren’t cops. https://t.co/xBpTgap6Zw

For the folks reflexively saying “there weren’t any secret police!”, here’s the reporter who was on the ground saying some of the arresting officers had been staking out the embassy in plain clothes for days. https://t.co/T6LoOfCN9H

Fairbanks had visited Assange in the embassy last month and she reported seeing the Australian getting into a “big confrontation” with the ambassador during the visit. She said that the arrest was “obviously co-ordinated” and that Ecuadorian, US and UK authorities had planned it for a long time.