Once again, prohibited chemical weapons have been used in Syria — specifically shells filled with chlorine gas. Despite the significant number of casualties, however, the attack was not met with the usual outcry. World leaders remained tight-lighted with only Macron deciding to break the silence. This is easily explained since the West has good reason to keep schtum.

In the early hours of Sunday morning, residential areas of Aleppo were bombarded with 120 mm mortar shells filled with chlorine gas, resulting in more than 100 people seeking medical treatment. Women and children were among those hospitalised and everyone complained of breathing difficulties.

Aleppo is Syria’s largest city and one of the oldest in the world. It was divided in half during the civil conflict and the military operation to liberate the half occupied by militants was one of the most important carried out by government forces and became a major turning point in the war as a whole. At that time, the city was under the international spotlight for several months and the West regularly accused Damascus of allegedly committing numerous war crimes and crimes against humanity in order to gain time for the so-called moderate opposition. The areas under its control were next to those held by outright terrorists. 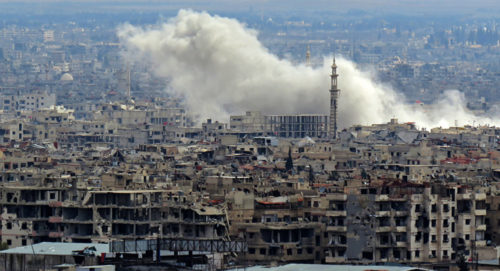 By December 2016, it was all over. Reports on “Assad’s atrocities” turned out to be false, while some of the militants leaving Aleppo were transferred to Idlib province by…