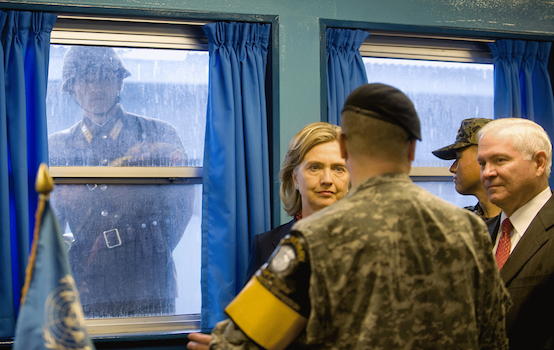 A North Korean soldier looks in through the window of the T2 building as Secretary of State Hillary Clinton and Secretary of Defense Robert M. Gates tour the Demilitarized Zone in Korea on July 21, 2010.(U.S. Department of Defense photo.)

With his recent “my (nuclear) button is bigger than yours” taunt, Donald Trump’s rhetoric has fully descended into school yard braggadocio, with North Korea’s Kim Jong-un as a convenient foil. But his administration’s overwhelming reliance on military and economic pressure rather than on negotiations to influence North Korea’s nuclear weapons and ICBM programs is hardly new. It is merely a continuation of a well-established tradition of carrying out what the national security elite call “coercive diplomacy”.

As Alexander George, the academic specialist on international relations who popularized the concept, wrote:

The general idea of coercive diplomacy is to back one’s demand on an adversary with a threat of punishment for noncompliance that he will consider credible and potent enough to persuade him to comply with the demand.

The converse of that fixation on coercion, of course, is rejection of genuine diplomatic negotiations, which would have required the United States to agree to changes in its own military and diplomatic policies.