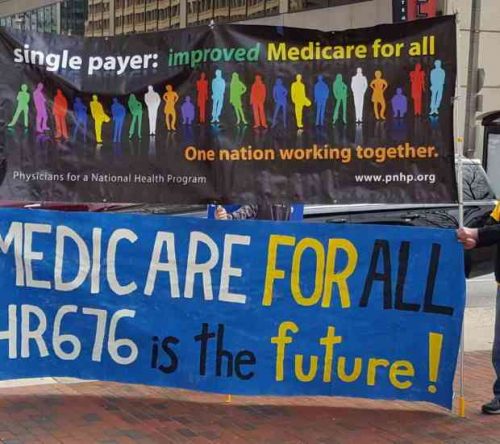 State-level reforms for universal health care are laudable; they are not single payer

Two states with a long history of state-based healthcare reform efforts, California and New York, are hard at work organizing for state bills labeled as single payer healthcare plans. Other states are moving in that direction too. This raises questions by single payer advocates: Can states create single payer healthcare systems? Does state-level work help or hinder our goal of National Improved Medicare for All (NIMA)?

The movement for NIMA gained momentum throughout 2017, largely due to rising premiums under the Affordable Care Act (ACA) and Republican efforts to worsen the healthcare crisis. Supporters of NIMA mobilized to build support for single payer legislation in Congress, spoke out at Town Halls and pressured lawmakers. As a result, the House bill, HR 676: The Expanded and Improved Medicare for All Act, grew to 120 co-sponsors, the highest number in its 15-year history, and Senator Sanders was successfully pressured to introduce a bill in the Senate, S 1804: The Medicare for All Act.

As momentum grew, the expected push back materialized. In the spring, Democrats in Congress urged people to focus on fixing the ACA and uttered support for various forms of a public insurance, a ‘public option’ or Medicare buy-in. In August, well-known progressives, claiming to be ‘single payer supporters’, published articles arguing that single payer was too much to ask for and…