The ancient mud brick walls circling Raqqa’s deserted old city are almost the only structure still intact. Inside, shops and homes spill crumbling concrete onto either side of the narrow roads, block after block.

Fighting between U.S.-backed militias and Islamic State in the jihadist group’s former Syria stronghold has peppered mosques and minarets with machine-gun fire while air strikes flattened houses. No building is untouched. Senior council member Omar Alloush estimated at least half the city has been already completely destroyed.

“The old clock tower could be heard from outside the walls once. It’s damaged now. It’s silent,” Mohammed Hawi, a Raqqa-citizen, said at a nearby home occupied by the Syrian Democratic Forces alliance (SDF). Driving militants out has caused destruction that officials say will take years and cost millions of dollars to repair. A major bridge leading into eastern Raqqa lies collapsed after a latest coalition air strike. Beyond it, damaged water towers and the skeletons of teetering residential blocks dot the skyline. “We’re waiting for help to repair the east bridge,” co-president Leila Mustafa, a civil engineer, said. “If it doesn’t arrive soon, we’ll begin ourselves, using any means we have, though we have practically nothing.” 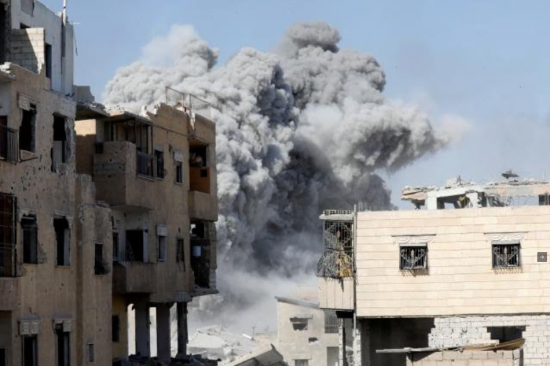 Smoke rises at the positions of the Islamic State militants after an air strike by the coalition forces near the stadium in Raqqa, Syria, October 4, 2017. (Reuters/Erik De Castro)