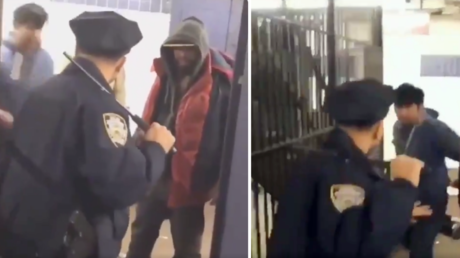 A video of a New York Police officer fighting off a group of hostile intoxicated men at a subway station has gone viral. Despite repeated warnings to back off, the homeless men kept on harassing and crowding in on the cop.

East Broadway subway station in Manhattan was the scene of a tense confrontation between the solitary police officer and the aggressive crowd on Sunday night. Responding to a harassment report against a female passenger, one of New York’s finest rushed to her rescue, and encountered several belligerent men.

Video footage of the incident shows the cop fending off an intoxicated group of at least five men who, despite repeated warnings, kept on coming at the officer. “Step back! Step back! I don’t want to hurt you!” he shouts, repeatedly trying to defend himself with kicks and his baton. Two of the men attempt to hold the attackers back but to no avail. During a struggle, one man falls onto the tracks, at which point the video ends.

This is what the men and women in uniform sign up to do each day. Face the danger, no matter what type just to make sure people we serve are protected. Great work done by our proud member who showed restraint and bravery. He’s also a ranking member in @USArmy@NYPDTransit@NYCPBApic.twitter.com/5FWcFWDE24

To protect the life of one of his attackers, the officer requested that the power be cut on the tracks, before helping the man out. When back-up arrived, police took five men into custody, only to release them for medical evaluations. Police trawled the video of the incident to identify suspects and the gang was later booked for breaches of city transit rules. The District Attorney, however, declined to pursue charges. The name of the NYPD hero has not been released.