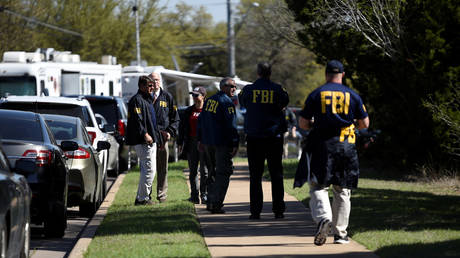 Federal agents have detained the head of New Mexico’s people’s militia group, whose volunteer forces have ‘helped’ US border agents detain hundreds of illegal immigrants along the US-Mexico border, for illegal possession of arms.

Larry Mitchell Hopkins, who runs the United Constitutional Patriots (UCP) was arrested on Saturday on charges of possessing firearms and ammunition as a convicted felon, the FBI said. No other information was shared with the public. The 69-year-old is due to appear in US District Court in Las Cruces, New Mexico on Monday.

“This is a dangerous felon who should not have weapons around children and families,” New Mexico Attorney General Hector Balderas stated.

Today’s arrest by the FBI indicates clearly that the rule of law should be in the hands of trained law enforcement officials, not armed vigilantes.

The militia, made up mostly of veterans armed with guns and other tactical gear, had volunteered to help the Border Patrol agents deal with a wave of immigrants in the vicinity of Sunland Park, New Mexico until President Trump’s wall is built there. Their tactics, however, triggered a massive backlash as they were seen chasing down suspected illegals and holding them at gunpoint before surrendering them to US authorities.


This week, Hopkin’s ‘vigilante patriots’ detained nearly 300 people in the desert. Footage of what they call ‘citizen’s arrests’ –and what critics denounce as simple ‘kidnapping’– showed a big crowd, including women and children kneeling on the ground waiting for government officers to pick them up.

While the group believes their harsh tactics are legal and necessary to stop what President Trump calls an “invasion” over the US southern border, UCP’s methods have not been welcomed by New Mexico Gov. Michelle Lujan Grisham, who noted that “regular citizens have no authority to arrest or detain anyone.” Meanwhile, the American Civil Liberties Union called them a “fascist militia” and demanded that authorities investigate the organization.