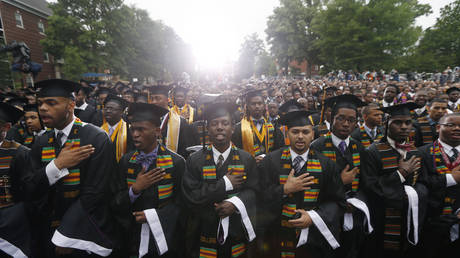 America’s only historically black, all-male college has announced a major admissions policy shift, taking in transgender men from 2020. However, Morehouse College in Atlanta says it will not allow transitioning females to attend.

In a statement titled ‘Morehouse College reaffirms dedication to educate and develop men,’ the school revealed on Saturday that it would “allow individuals who self-identify as men, regardless of the sex assigned to them at birth, to be considered for admission” by the Fall 2020 semester.

Also on rt.com
Professor suing university after being fired for ‘troubling’ views on gender dysphoria in kids


The new policy, which it says came after more than a year of “community engagement with faculty, staff, students, and alumni,” won’t apply to students seeking admission before then.

“In a rapidly changing world that includes a better understanding of gender identity, we’re proud to expand our admissions policy to consider trans men who want to be part of an institution that has produced some of the greatest leaders in social justice, politics, business, and the arts for more than 150 years,” said Terrance Dixon, vice president for enrollment management at Morehouse.

However, the policy also goes on to outline that it won’t apply to individuals who identify as women, and that “if a student transitions from a man to a woman, that student will no longer be eligible to matriculate at Morehouse.”

The college, whose previous students include Martin Luther King Jr and Spike Lee, received some plaudits for the move on Twitter.

Gonna need lots of educating of faculty and students and updating of policies. this is progress.

Shout out to all the trans men who currently attend, or graduated from the school and the folk who worked hard for this change.

This is a significant FIRST step for Morehouse College as they are now considering for admission applicants who live and self-identify as men, regardless of the sex assigned to them at birth…https://t.co/WY5trZFHTP

When Morehouse was founded in 1867, the idea of educating former slaves was a radical notion. Only a few years earlier teaching black folks how to read was illegal. So Morehouse admitting trans students is a radical now as its founding was then. We must embrace change.

However, Morehouse also came under fire, with some people ridiculing the notion generally, and others saying it’s hugely exclusionary to people identifying as female.

I encourage y’all to read Morehouse’s new Trans policy CAREFULLY. This ain’t it. Any student who who transitions from M to F or begins to self-identify as a woman/femme while at Morehouse will no longer be eligible to matriculate at Morehouse College.

yes, morehouse is allowing transgender men to be admitted. but let’s please not ignore that students who begin to identify as trans women will no longer be eligible to matriculate at morehouse, and the erasure of non-binary and gender non conforming bodies /:

Honest question. Should a Trans man be allowed to enroll in a All-Woman’s College? According to the Morehouse policy you just have to indentify as a man, you could physically still be a woman, correct?