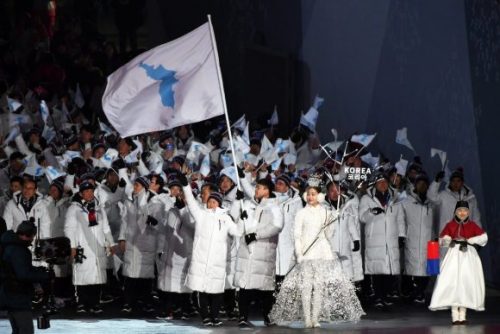 The unified Korean team marches in the opening ceremony of the Winter Olympics at Pyeongchang Olympic Stadium. Credit James Hill for The New York Times.

President Moon said at a carefully planned dinner to honor Kim Yong Nam, the North Korean president’s sister and Vice President Mike Pence that he hoped the Winter Olympics would be remembered as the “day peace began.” But, Vice President Mike Pence did his best to make sure that did not happen. He missed the opportunity to further peace on the Olympic peninsula created by Moon. The historic opening created by North and South Korea at the Olympics was an opportunity but Pence handled the situation like a childish teenager.

At a dinner dinner reception where President Moon sought an opportunity for dialogue between the US and North Korea, Pence went through great lengths to avoid talking to the North Koreans. According to Reuters, when Pence arrived late to the reception he told Moon he planned to leave directly after a photo session but Moon asked him to “come and say hello to friends.” Moon was trying to create a dialogue to advance peace but Pence went around the table and shook hands with everyone except Kim Yong Nam of North Korea.