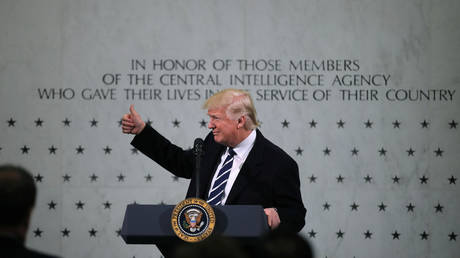 The political Left increasingly dominates US intelligence agencies and that “bias may have crept into CIA analyses,” a former analyst in the agency claims, calling out former colleagues for their increasingly illiberal liberalism.

“A considerable body of evidence… indicates that many CIA people have left-leaning political preferences,” John Gentry, a professor who spent 12 years as an analyst with the agency, recently wrote in the International Journal of Intelligence and Counterintelligence, warning that the “institutionally embedded, partisan bias” could skew the agency’s work and damage its credibility.


The agency’s pervasive liberalism jeopardizes its ability to provide “objective intelligence analysis,” and internal agency machinations are thoroughly tainted with political motives, Gentry claims. He slams former CIA directors John Brennan, Michael Hayden and Michael Morell, as well as former Director of National Intelligence James Clapper and other senior intel vets – many of whom have landed cable news gigs as anti-Trump talking heads and/or published jeremiads lamenting America’s decline since their retirement – for their criticism of then-candidate Donald Trump during the 2016 election, which he calls “unprecedented for intelligence officers in [its] substance, tone, and volume.”

Critics went far beyond trying to correct Trump’s misstatements about US intelligence; they attacked him as a human being.

The result? “An ideologically center-left ‘deep state,’ built in part upon policies like Obama’s as a check on Trump.” The president’s strained relationship with his intelligence agencies, whom he recently called “passive and naïve” for their insufficiently-militant take on Iran, is only to be expected, given the rhetoric of ex-directors like Brennan, who told CIA agents they were obliged to “refuse to carry out” the president’s orders in the event that “unstable” Trump fired special prosecutor Robert Mueller, and like Morell, who penned an editorial begging voters to line up behind Clinton in 2016.


Perhaps the CIA has just fomented so many coups in other countries it was inevitable that a group would someday try it at home? Gentry is hardly the first ex-CIA analyst to point out the American intelligence community’s leftward migration, and Attorney General William Barr is currently conducting a probe into anti-Trump bias at the FBI during the early days of the ‘Russiagate’ probe in 2016. Former CIA operations officer Charles Faddis called the agency’s politicization “a threat to the republic,” while fellow ex-officer Brad Johnson lamented that talk of “how best to ‘resist’” was commonplace hallway chatter at the CIA.

But how to fix it? Gentry says introducing “intellectual diversity” is paramount – that the solution “may be to reform how analysts think, not just how they act.” Fortunately, the CIA has a lot of experience reforming how people think.