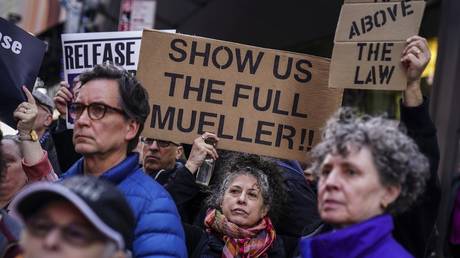 “My Committee needs and is entitled to the full version of the report and the underlying evidence consistent with past practice,” Nadler said in a statement released Friday. “Even the redacted version of the report outlines serious instances of wrongdoing by President Trump and some of his closest associates.”

Nadler’s subpoena demands the material by May 1.

This morning, @HouseJudiciary has issued a subpoena to the Department of Justice for the full the Mueller report and the underlying materials. DOJ is required to comply with that subpoena by May 1. pic.twitter.com/nzu9O5CC36

Mueller’s report cleared President Trump of any collusion or conspiracy with Russia to swing the 2016 election, and found no legal basis to charge the president with obstruction of justice, but stopped short of“exonerating” him.

Rather, Mueller left it up to Congress to decide whether or not to “apply obstruction laws,” a decision that Nadler has embraced.

“It now falls to Congress to determine the full scope of that alleged misconduct and to decide what steps we must take going forward,” his statement continued. Speaking to reporters on Thursday, the New York Democrat said that impeachment proceedings are “one possibility.”

“We will proceed with our enquiries,” he said, adding that Mueller’s report “was probably written with the intent of providing Congress with a road map.”


Mueller’s roughly 400 page report is littered with more than 800 redactions, from a name here and there to entire pages of text. Theses redactions were made for four reasons: to protect “investigative techniques,” to avoid releasing classified grand jury information, to avoid compromising ongoing investigations, and to avoid infringing on the privacy of “peripheral third parties.”

It is unclear whether a completely unredacted report can be released, and whether such a report could possibly implicate Trump in anything illegal. Trump himself has claimed complete vindication, and Republicans have dragged Democrats for attempting to keep the ‘Russiagate’ investigation alive.


“Democrats want to keep searching for imaginary evidence that supports their claims, but it is simply not there,” said House Minority Leader Kevin McCarthy. “It’s time to move on.”