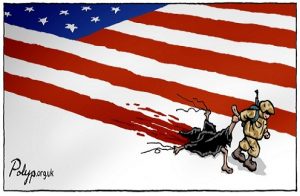 For almost two decades, the US pursued a list of ‘enemy countries’ to confront, attack, weaken and overthrow. This imperial quest to overthrow ‘enemy countries’ operated at various levels of intensity, depending on two considerations: the level of priority and the degree of vulnerability for a ‘regime change’ operation.

The criteria for determining an ‘enemy country’ and its place on the list of priority targets in the US quest for greater global dominance, as well as its vulnerability to a ‘successfully’ regime change will be the focus of this essay. We will conclude by discussing the realistic perspectives of future imperial options.

The following are high on the US ‘enemy list’:

1) Russia, because of its military power, is a nuclear counterweight to US global domination. It has a huge, well-equipped armed force with a European, Asian and Middle East presence. Its global oil and gas resources shield it from US economic blackmail and its growing geo-political alliances limit US expansion.

2) China, because of its global economic power and the growing scope of its trade, investment and technological networks. China’s growing defensive military capability, particularly with regard to protecting its interests in the South China Sea serve to counter…