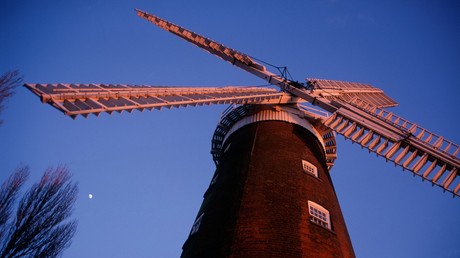 The Integrity Initiative is just one gear in a vast transatlantic propaganda machine to hype up the new Cold War with Russia to justify higher military budgets and destroy any critic who gets in the way, Max Blumenthal said.

A batch of hacked documents, reportedly from the UK funded think-tank ‘Integrity Initiative’, apparently reveal the anti-propaganda site’s links to NATO. Among the revelations are supposed efforts to infiltrate European media and editing Wikipedia pages in an anti-Russian manner.

Investigative journalist Max Blumenthal shared his thoughts on the new revelations about the Integrity Initiative project.

He called this an astounding scandal where “a previously unknown think tank has been exposed as a front for British military intelligence operating through clusters of journalists and politicians and operatives in NATO member states.”

In Blumenthal’s opinion, it was done to hype up the new Cold War with Russia to justify increased military budgets and to attack left-wing political figures in NATO member states, including Jeremy Corbyn, through the Twitter account of the Integrity Initiative – “what we have learned through these documents is in fact part of the operations funded by the British Foreign Office.”

He also pointed out that the mainstream media: “The New York Times, The Washington Post, which are fixating on Russian troll farms, are not touching this gigantic propaganda mill.”

The #IntegrityInitiative story is insane. If this was a shady org set up in the basement of a building in Moscow it would have been instantly blasted across the pages of the WaPo and NYT. But it’s just a British gov-funded disinfo outfit so…silence. https://t.co/sStNzgtF4C

“It makes perfect sense that the same journalists who are the media gate keepers in the UK would be very hostile to the idea of reporting critically on the military intelligence find group that they have worked with one way or another wittingly or unwittingly,” he continued.

As for the choice of authors by the think tank, e.g. ex-RT anchor Liz Wahl and researchers with ties to NATO, Blumenthal said that “Wahl is basically renting her services and her background as the RT anchor who resigned on air in protest of RT to British military intelligence and to NATO.”

Since Liz Wahl is paid by the Institute for Statecraft,”which is a semi-secret think tank that has been the parent of the Integrity Initiative influence operation,” Blumenthal says that it shows “her to be the ultimate “useful idiot”: while she is going and testifying to Congress about Russian propaganda she’s propagandizing on behalf of a covert military intelligence front.”

“I think it is the covert part that is significant. We didn’t know that the Institute for Statecraft was completely run by British military intelligence personnel and funded by the Foreign Office which is an umbrella organization, the umbrella ministry which oversees GCHQ and MI6 foreign intelligence service. This is who Liz Wahl is renting her services to. This revelation represents the pinnacle of hypocrisy,” he said.

Commenting on Integrity Initiative claim to be an independent platform fighting disinformation, Blumenthal said that leaked documents show explicitly that “the Institute for Statecraft that oversees the Integrity Initiative aims to increase the militarization of the British society by indoctrinating British youth through military training, that they explicitly aim to increase the military budget by hyping up the Russian threat and want to divert money from public services to the military budget.”

Also on rt.com
Do it CIA style: What you need to know about latest leak on UK-funded psyop


“There are close connections to military personnel and in fact the British Ministry of Defense is funding this think tank which advertised itself as independent and falsely claimed that it didn’t lobby foreign governments,” he explained.

Blumenthal said now it is clear that “this government has a clear agenda which is not only the militarization of British society but also an attack on any critic or person who gets in the way of their agenda.”

He concluded calling the Integrity Initiative “just one gear in a really vast transatlantic propaganda machine that aims to hype up the New Cold War with Russia to justify higher military budgets and attack, demonize and destroy any politician or critic who gets in the way.”