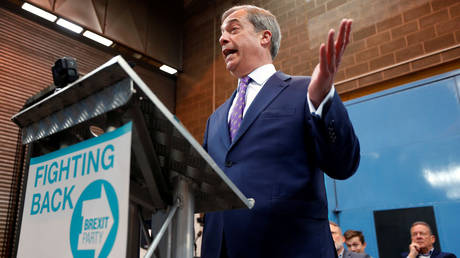 Nigel Farage, the leader of the new Brexit Party, says his anti-EU group will mirror UKIP on policies, but when it comes to personnel there will be a “vast difference,” with no far-right faction.

The former UKIP leader launches his new party in Coventry on Friday in preparation for fighting European elections that the UK may be forced to participate in on May 23, if a Brexit deal cannot be passed by British lawmakers.


Speaking on BBC 4’s Today program, Farage, who quit UKIP in December due to what he saw as leader, Gerard Batten’s “obsession” with former head of the EDL, Tommy Robinson, claims his Brexit Party will not have such far-right individuals.

UKIP did struggle to get enough good people into it but unfortunately what it’s chosen to do is allow the far right to join it and effectively take it over and I’m afraid the brand is now tarnished.

Farage is hoping to attract support from disgruntled pro-Brexit Tories, unhappy with Prime Minister Theresa May delaying the UK’s exit from the European Union.

The hardline Brexiteer also revealed that his party would not be taking donations from Aaron Banks, the millionaire who helped to bankroll UKIP, suggesting the businessman wants to stay out of the spotlight when it comes to political donations.

We haven’t asked Aaron Banks for any money; he’s not going to give any money. He’s been very badly burned by what happened since the referendum.

The UK Parliament is currently in recess until April 23, giving Farage’s Brexit Party the opportunity to grab the media and public’s attention, and take advantage of the fact that the issue of Brexit is dominating political discourse in Britain.