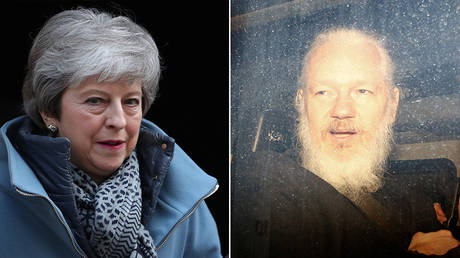 British Prime Minister Theresa May has welcomed news of WikiLeaks founder Julian Assange’s arrest, saying it shows ‘no one is above the law.”

May confirmed to Parliament that Assange’s arrest was made for an alleged breach of bail, and following an extradition request from the United States. May also welcomed the co-operation of Ecuador’s new pro-US government in getting Assange evicted, after almost seven years in the country’s London embassy.


Although Assange allegedly breached the conditions of his bail by walking into the Ecuadorian Embassy and seeking asylum in 2012, his de-facto house arrest there has been condemned by the United Nations as inhumane, and the WikiLeaks founder has been subject to an eavesdropping campaign in order to build a case for his eviction, WikiLeaks’ editor-in-chief Kristinn Hrafnsson told reporters on Wednesday.

Assange is wanted in the US for his role in publishing a tranche of damning classified US military information in 2010, including footage of a US Apache helicopter killing 12 people, among them two Reuters staff. US Army whistleblower Chelsea Manning, the source of the leak, is currently behind bars for refusing to testify against WikiLeaks before a Grand Jury.

The US indictment against Julian Assange alleges that the whistleblower engaged in “conspiracy” with Manning in 2010. The US Department of Justice said Assange is charged with conspiracy to commit computer intrusion and alleged attempts to break the password for a classified US government computer.


While May welcomed Assange’s capture, condemnation poured in from activists, whistleblowers, and supporters. Former MI5 agent Annie Machon called the arrest “absolutely disgusting” and “an egregious violation of so many rights under international law.”

‘Baywatch’ actress turned activist Pamela Anderson, a friend of Assange, slammed the UK for being “America’s bitch,” and May for needing “a diversion from your idiotic Brexit bulls**t.”