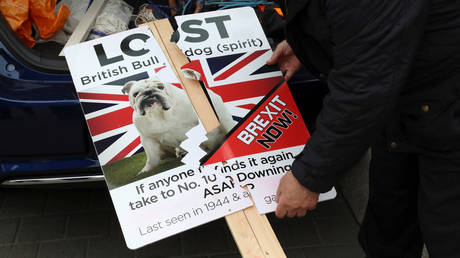 The UK has passed legislation permitting members of Parliament to make, during the debate on it on Tuesday, legally binding alterations to PM Theresa May’s request to the EU for a delay until June 30 of its Brexit departure date.

The law designates Tuesday’s 90-minute debate period for lawmakers to question and even to legally change the substance of May’s planned formal request for a Brexit extension, which she plans to deliver during Wednesday’s emergency EU summit.


May has already written to European Council President Donald Tusk to ask for an extension on Brexit so that UK lawmakers could agree on a plan of action – something that has so far eluded them during three parliamentary votes. The UK has already blown its first Brexit date, March 29.

One thing UK lawmakers were able to agree on – by one vote – was a bill to block a “no deal” Brexit, essentially forcing May to reach some kind of compromise. Last week, she entered into talks with opposition leader Jeremy Corbyn in an effort to reach a deal members of both camps can hold their noses and vote for, though two ministers resigned from her cabinet in protest over the meeting.

Despite the gesture of transpartisanism, however, Labour reported that May’s talks with Corbyn have thus far amounted to nothing, with the Conservative leader unable to offer any “real change or compromise” in the form of policy concessions or amendments to her three-times-failed Brexit deal. Corbyn is one of many voices from multiple parties to call on May to resign.

The UK PM is due to meet with both German chancellor Angela Merkel and French President Emmanuel Macron on Tuesday before Wednesday’s fateful EU summit, presumably to plead with them one-on-one to hear her plea for an extension. If none is granted, the UK could be subjected to a no-deal Brexit as early as Friday.