Deep and damaging budget cuts to the armed forces in Britain are undermining the nation’s ability to defend itself, a former commander claims despite assurances from within the Tory government.

Since the 2010 Strategic Defence and Security Review (SDSR) the Army has seen dramatic cuts – but the Government is still looking to save another £20bn over the next ten years.

Forces experts say the figure is closer to £30bn, and troops as well as ships and helicopters are likely to be cut to make the savings.

General Sir Richard Barrons has called for a public debate over claims the country could be putting itself in a vulnerable position.

“There are potential risks to our homeland and our vital interests abroad that we cannot address with our capability,” he told the Times.

Against the advice of chiefs and veterans, the Tories announced plans to cut Armed Forces regular personnel by 33,000 before 2020.

However, as ministers scramble to save up to £30bn in the coming decade, there is a renewed focus on hardware.

According to reports, two Royal Navy minehunter ships are set to be axed while 12 Lynx helicopters will be decommissioned.

The UK fleet of Hunt-class and Sandown-class ships will be reduced from 15 to 13, the Times reports.

Serving troops sent to foreign lands for training will also be scaled back, under new plans. 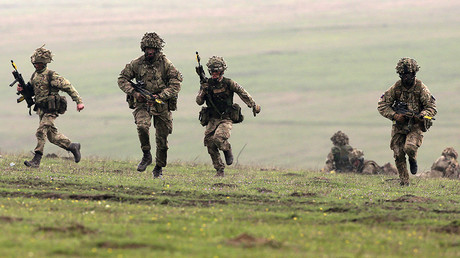 Light infantry battle groups sent to Kenya are set to be cut from five to three while armoured battle groups trained in Canada will be reduced by one.

The news comes soon after the forces were advised to cut civilian staff in favour of new tech like weaponised drones.

The Royal United Services Institute (RUSI) also warned of the impact of the cuts.

A report stated not only would manpower and machines be depleted – esprit de corps could go down the drain as well.

It said: “Such choices would reshape the UK’s defence capabilities over several generations, but the scale of such changes should not be underestimated. They would also go some way to balancing the MoD’s books.

“However, such decisions should not be miscommunicated as improved capabilities for the forces.

“These choices cut capability and would harm the already fragile morale of uniformed and civilian staff. They would also undermine the Armed Forces’ ability to protect and defend the country in the long term.”