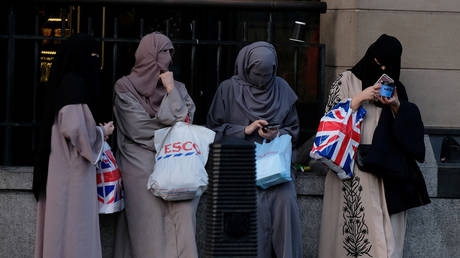 Anti-Muslim hate incidents reported across the UK have increased by nearly 600%, in the week following the New Zealand mosque attacks that saw 50 Muslim worshippers killed by a white supremacist.

Tell MAMA, a British organization that monitors Islamophobic incidents, revealed that nearly all cases that have been recorded comprised of “language, symbols or actions” linked to the Christchurch terrorist attacks.

Also on rt.com
4 mosques attacked with SLEDGEHAMMERS in Birmingham (VIDEOS)


They cite people pretending to point a gun at Muslim women as an example of the correlation to the New Zealand killings.

The director of Tell MAMA, Iman Atta OBE, claims that the spike in Islamophobic cases illustrates how some people have an ongoing and persistent hatred of Muslims, seeing them as “fair game.”

Muslims in New Zealand were killed and British Muslims feel the anger of bigots. It is perverse.

The monitoring group also revealed that the sharp rise in anti-Muslim hate incidents reported to them are higher in number in the last seven days than in the week after the Manchester terrorist attack in 2017.


28-year-old Australian Brenton Tarrant has been charged with the brutal murders that saw Muslim worshippers at two Christchurch mosques gunned down as they gathered for Friday prayers, March 15. It was the worst shooting in the country’s history.