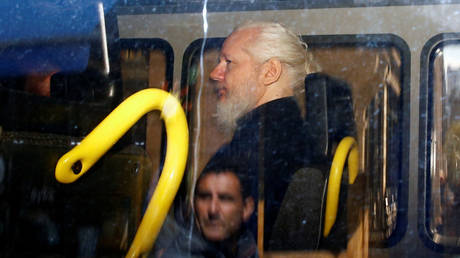 London is “very grateful” to Ecuador’s President Lenin Moreno for laying the groundwork to Julian Assange’s arrest, the UK Foreign Office has said, expressing hope that the ties between the two countries will now thrive.

“We are very grateful to the Government of Ecuador under President Moreno for the action they have taken,” said Alan Duncan, minister of state for Europe and the Americas. Thursday’s arrest, in which police officers entered the Ecuadorian embassy to drag Assange out, comes after “extensive dialogue between our two countries.”


“I look forward to a strong bilateral relationship between the UK and Ecuador in the years ahead,” he added. To Duncan, “it is absolutely right that Assange will face justice in the proper way in the UK.” It is up to courts now to decide what happens next to the whistleblower.

Assange was taken into custody at a central London police station on Thursday, and will be presented to the Westminster Magistrates’ Court later in the day. An exclusive video by Ruptly video agency showed him pleading that “the UK must resist… this attempt by the Trump administration.”


The WikiLeaks founder was at the center of two criminal investigations, one in the US and another in Sweden. While the latter was dropped in 2017, the American one is still ongoing.

Assange has been “arrested on behalf of the United States authorities after his arrival at a central London police station,” the Metropolitan Police confirmed. The US cited the Extradition Act while filing the request, they told.

Meanwhile, the US Department of Justice said that the whistleblower faces of up to five years in prison.