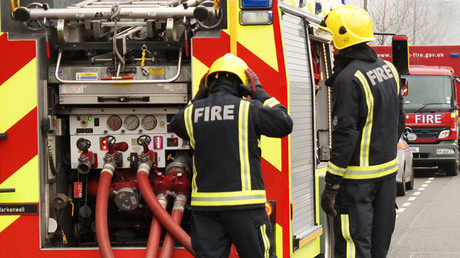 Two crews of firefighters in Ipswich, England, spent six hours struggling to remove a ring from a man’s penis. They were called to assist at the emergency department of Ipswich Hospital in the early hours of Saturday morning.

Initially, firefighters from Ipswich East Station were summoned to the hospital in response to the unusual situation. However, after four hours of struggling to remove the sex accessory, they had to call on their colleagues from Princes Street Station for a helping hand.

The two crews spent a further two hours trying to remove the ring before the man was eventually relieved of his problem at 6.40am.

“Fire crews were called for assistance by the East of England Ambulance Service. They attended Ipswich Hospital in the early hours of Saturday morning and removed a large ring from the base of a man’s penis,” a spokesman for Suffolk Fire and Rescue Service said to the Ipswich Star.

It is not known if the man required any further medical assistance after the ring was removed.

Penis ring removals have become an increasing problem for firefighters in the UK. Last February, London Fire Brigade released figures showing that the number of penis ring-related callouts had doubled in recent years.

“Our best advice is: if it doesn’t fit, don’t force it,” the fire brigade said.