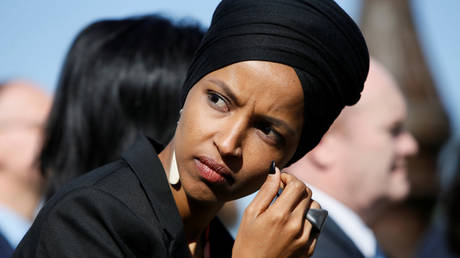 President Donald Trump has whipped Twitter into a frenzy by posting a video with a quote from Congresswoman Ilhan Omar’s speech mixed with footage of the 9/11 attacks, prompting accusations of inciting anti-Muslim violence.

The video that juxtaposes a standalone quote from Omar’s speech at the Council on American-Islamic Relations (CAIR) with the footage of the two planes crashing into the twin towers on September 11, 2001, has been since retweeted over 40,000 times, sparking fierce backlash against both Omar and Trump’s condemnation of her.

Speaking at the CAIR banquet last month, Omar lamented that American Muslims still have to battle with the stigma hanging over them since 9/11. Advocating for a pushback against vilification of and misconception about Muslims in the US, Omar said: “Far too long we have lived with the discomfort of being a second-class citizen and frankly, I’m tired of it, and every single Muslim in this country should be tired of it.”

She added: “CAIR was founded after 9/11 because they recognized that some people did something and that all of us were starting to lose access to our civil liberties.” CAIR was actually founded 7 years earlier, in 1994. Omar’s office said the freshman Minnesota representative “misspoke.”

The video posted by Trump features only the second sentence, which prompted many mainstream media journalists to accuse him of deliberately distorting the original message by taking it out of context. Even more, the second part of the video has the “some people did something” part looped and interspersed with footage of the burning World Trade Center.

Members of Congress have a duty to respond to the President’s explicit attack today.@IlhanMN’s life is in danger. For our colleagues to be silent is to be complicit in the outright, dangerous targeting of a member of Congress.

We must speak out.

“Enough is enough. No more silence, with NY Post and now Trump taking Ilhan’s words out of context to incite violence toward her, it’s time for more Dems to speak up,” tweeted Tlaib, the only female Muslim congresswoman besides Omar.

Enough is enough. No more silence, with NY Post and now Trump taking Ilhan’s words out of context to incite violence toward her, it’s time for more Dems to speak up. Clearly the GOP is fine with this shameful stunt, but we cannot stand by.

On the media flank, Emily L. Hauser, writer for The Daily Beast, The Week and a number of other high-profile liberal media, went even farther, accusing Trump of endangering “the lives of all American Muslims.”

It’s really, really important to understand that Trump is not only endangering Rep. Omar’s life, but also the lives of all American Muslims. I’m not often speechless, but I am right now. Shaking & speechless. #IStandWithIlhan#IStandWithMuslims

Multiple others echoed the accusations.

The President is actively and willfully endangering the life of a member of Congress.

I just don’t see how Twitter can claim that what Donald Trump is doing to Ilhan Omar is anything other than targeted harassment.

These are @IlhanMN’s remarks in context.

What Trump is doing is beyond shameful. He’s trying to get her killed.

All Members of Congress should denounce him immediately. https://t.co/CVy3cp1Uh8

On the other side, prominent conservative voices blared the same message implied in the video, borderline accusing Omar of being a terrorist apologist.

Who could ever forget this terrible day?

Yet Ilhan Omar says, “Some people did something?”

Yes, Mr. President. We will NEVER forget! Not 9/11, nor Omar’s dismissive comment.

Criticizing Ilhan Omar for her fantastically dumb 9/11 comment isn’t inciting violence against her.

The fact I even have to type these words is beyond depressing.

Shut up, you hysterical fannies.

Ilhan Omar trivializes the 9/11 terror attacks as “some people did something,” refuses to apologize after outrage over her comments

Trump, who is from New York City, calls out Omar’s words and reminds the nation of what happened that day

Guess which person Democrats are mad at

Their feud with Omar goes back to her calling out of the inordinate influence of the Israeli lobby in American politics. Similar to liberals’ blanket denouncement of Trump’s perceived incitement to violence against Omar, conservatives have branded her an anti-Semite for pointing to Israel’s deep Washington inroads.

What does Nancy Pelosi do with a terrorist sympathizing anti-Semite who’s loved by Louis Farrakhan?

Gives her a spot on the Foreign Affairs Committee.

If it weren’t clear *before* her unbelievable comments about 9/11, Ilhan Omar needs to go.

Omar’s detractors have implicitly associated her with 9/11 terrorists before – in one example, a poster of her next to an image of the Twin Towers was put up in the rotunda of the West Virginia statehouse, leading to a fight among local lawmakers.