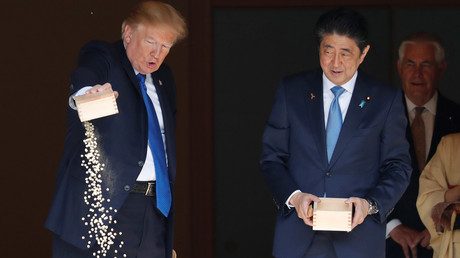 A feeding frenzy has erupted on Twitter after Donald Trump was filmed lobbing a liberal amount of fish food into a koi pond In Japan.

The US president is in Japan for meetings with the newly re-elected Prime Minister Shinzo Abe. The visit is part of a tour around Asia – Trump’s longest foreign trip as president.

On Sunday, Trump visited Japan’s Akasaka Palace, where his intense fish-feeding skills came under scrutiny online. Taking time out at the former Imperial Palace to feed koi carp, Trump and Abe were filmed being overly generous with fish food by dumping almost an entire box into a pond.

The pair had earlier been given a spoon with which to fleck the special food into the water. The comical, but by no means extraordinary incident, has created a whirlpool of comments and gifs online. The reaction has mostly focused on Trump’s actions – despite Abe actually taking the lead in the fish-food dump.